The U.S. Energy Association, at the request of the U.S. Agency for International Development (USAID), launched a multiyear Electricity Market Initiative (EMI) in July 2018 to enhance the integration and operation of power markets in Southeast Europe. Under the EMI, USEA is working with transmission system operators (TSOs), and market operators (MOs) across the region, as well as electricity regulators to accelerate the development of day-ahead markets; promote clean energy integration and reduce emissions; facilitate cross-border transactions; encourage market coupling; and in the process, reduce wholesale power prices and promote economic growth.

The map below shows the 11 countries and 14 companies that signed our memorandum of understanding, either in July 2018 in Podgorica, or in subsequent months, and which are the members of the EMI. 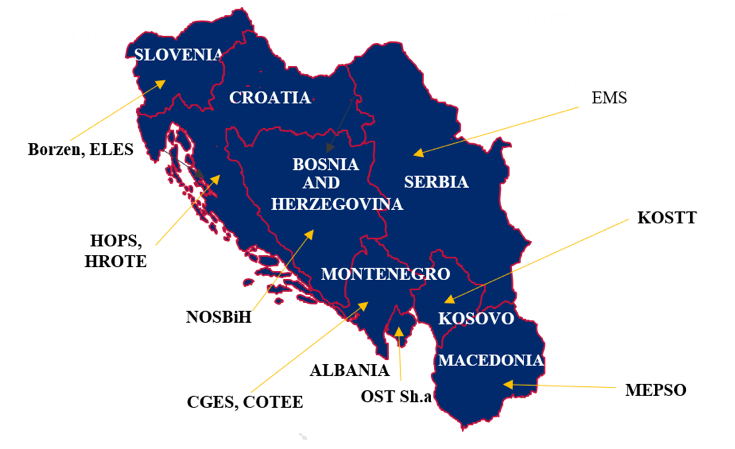 These countries have enormously different systems. Including one (Albania) with nearly all hydro generation; one with nearly all coal (Kosovo); one with nuclear (Romania) and one with natural gas (Serbia). Some countries are farther along than others in implementing the EU’s third energy package, and all have state-owned energy assets, while trying to encourage more RES development without spending too much to do so. Some countries have vibrant power exchanges while others are in their initial stages or do not exist.

USEA has been working in the region for 25 years. After decades of transitioning from the legacies of centrally planned economies, the region is now poised to grow economically and socially, attracting private sector investment and creating jobs. That requires reliable, affordable, clean electricity, a pillar of growing economies.

A Conduit for Change

The power systems in these countries are largely siloed, with technical challenges to their individual operations—including pricing reserves. A more integrated grid, with open and transparent transactions across borders, would utilize the generation and transmission systems more effectively; lower wholesale and customer costs; provide incentives to optimize the use of existing facilities and develop new infrastructure; and stimulate private sector investment since the market size will be considerably larger. The benefits we would expect to emerge would include those shown in the figure below: 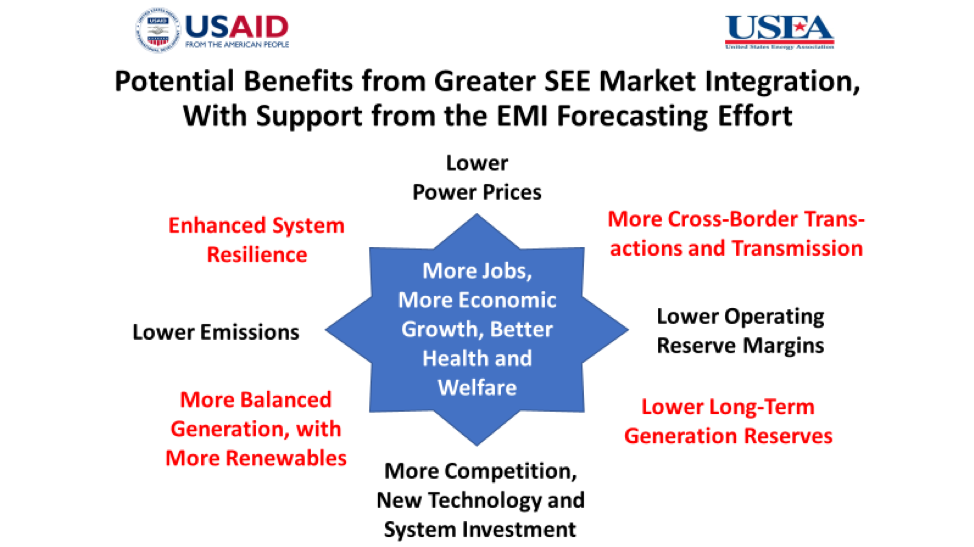 While five of the EMI countries are already part of the EU, the others– particularly the Western Balkans (WB6) countries - seek to become EU members, with all the economic, social and democratic benefits that such integration can provide.

But first they must adopt laws that comport with the EU, implement energy reforms to allow for renewable energy integration, and agree to become part of the EU’s Emissions Trading System (ETS) that places a tax on carbon emissions. A number of these countries continue to use older coal-fired generation facilities. USEA’s EMI is facilitating the development of those steps.

In November 2018, we published an article on the EMI in the Association of Energy Economists (DC chapter) newsletter, and that article is available here. In addition, we published an article in February 2019 in Public Utilities Fortnightly on the Energy Technology and Governance (ETAG) program, of which the EMI is a part, and that article is available here.

We meet at least three times per year, in the Fall, Winter and Spring, with considerable correspondence, conference calls and coordination in between working group meetings. The actual meetings include: a status report on our current scope(s) of work (SOW); a discussion and decisions on the next SOW; an update on key market developments in each county; and the sharing of perspectives from an array of worldwide experts on key energy topics relevant to the EMI (e.g., distribution system developments; RFP procurement best practice; power exchanges).

In our definitional mission in April 2018, the TSOs, MOs and regulators indicated that one area of considerable value would be for the EMI to help them quantify the benefits that would likely occur with greater market integration, in addition to simply recognizing that benefits would arise. The regulators also expressed support for this approach to support their decisions. Thus, in October 2018, the EMI launched its first major scope of work – using a recognized market model (Antares) to forecast what the impact of such integration would be.

As part of that effort, the members decided to focus on the year 2025. To support the modeling, the EMI members have provided us with considerable data on the system features and operations of each countries’ electricity network, including information on their projected demand; net transfer capabilities; existing and anticipated generation plants (thermal, hydro and renewable); and more.

Recognizing that there is uncertainty with regard to the conditions that will exist in 2025, we asked the EMI members to identify the factor they would most like to evaluate, and the responses indicated that varying four factors – the level of demand; the level of hydrology; the level of RES integration; and the level of market integration or coupling - were of greatest interest, so we have designed and are looking at 12 scenarios to capture the effects of those variables.

This summer (2019) we will conduct this analysis, and report results in the Fall, at which time we will also train the EMI members in the use of this model for their internal purposes.

Future Scopes of Work and Coordination

Throughout our work to date, the EMI has coordinated with other agencies, both in Europe and the US. For example, the Energy Community Secretariat has participated in all three of our working group meetings to date, and has made presentations on their programs and priorities. To enhance understanding and coordination, the EMI made a presentation on its efforts at the Secretariat’s meeting in February 2019. We have also coordinated closely with NARUC and other USAID contractors to keep our work focused on advancing markets and promoting policies to do so, rather than competing with others.

The EMI is currently planning its next major scope of work, which will likely involve more granular analysis of the benefits of consolidation, both for markets/prices and for operational efficiency, with a particular focus on RES integration. In addition, as natural gas begins to flow into this region, both through pipelines and LNG, we may explore the opportunities to bring more gas generation on line.

We will hold our next EMI working group meeting in Athens on May 30 and 31, and our meeting in the Fall will be either in September or October, in Sarajevo.

Value to the U.S. Economy

A more integrated electricity market in SEE will provide a broad and deep range of U.S. business opportunities across the supply chain. As this region’s infrastructure improves, expands and modernizes, the region will require design and construction companies, project developers, equipment manufacturers, financing, and software companies, including those focused on cybersecurity.

We invite your comments and ideas on how to promote the EMI’s objectives!