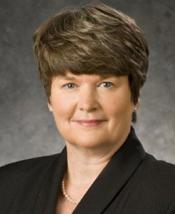 Curtis joined the company in 1981 and has held numerous leadership positions in the corporate support departments of Human Resources, Supply Chain Management, Information Technology, and New Asset Acquisition & Integration. Her longest tenure has been in Power Generation, where she held leadership responsibilities for several power stations and served as vice president–Merchant Operations before assuming her current post in January 2014.

Curtis earned a bachelor’s degree in liberal arts from the University of Virginia and her executive MBA from Virginia Commonwealth University.