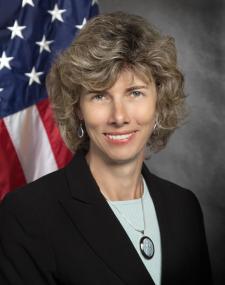 The Honorable Allison M. Macfarlane was sworn in as chairman of the U.S. Nuclear Regulatory Commission July 9, 2012. She was nominated by President Obama and confirmed by the Senate to a term expiring June 30, 2013. On July 1, 2013, Dr. Macfarlane was reconfirmed for a 5 year term.

Dr. Macfarlane, an expert on nuclear waste issues, holds a doctorate in geology from the Massachusetts Institute of Technology and a bachelor’s of science degree in geology from the University of Rochester. Prior to beginning her term as the NRC’s 15th chairman, Dr. Macfarlane was an associate professor of environmental science and policy at George Mason University in Fairfax, Va.

From 2010 to 2012 she served on the Blue Ribbon Commission on America’s Nuclear Future, created by the Obama Administration to make recommendations about a national strategy for dealing with the nation’s high-level nuclear waste. Her research has focused on environmental policy and international security issues associated with nuclear energy, especially the back-end of the nuclear fuel cycle. In 2006, MIT Press published a book she co-edited,Uncertainty Underground: Yucca Mountain and the Nation’s High-Level Nuclear Waste, which explored technical issues at the proposed waste disposal facility at Yucca Mountain, Nev.

During her academic career, she held fellowships at Radcliffe College, MIT, and Stanford and Harvard Universities. From 1998 to 2000 she was a Social Science Research Fellow-MacArthur Foundation Fellow in International Peace and Security. She has served on National Academy of Sciences panels on nuclear energy and nuclear weapons issues. From 2003 to 2004, she was on the faculty at Georgia Tech in Earth science and international affairs.

Dr. Macfarlane is the third woman to serve as chairman, the 33rd member and the only individual with a background in geology to serve on the Commission.