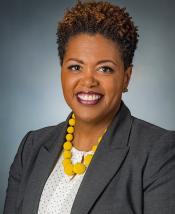 Bentina C. Terry is Senior Vice President for Northwest Region for Georgia Power. In this role, Bentina is responsible for the company's operations, sales, customer service, economic and community development, and external affairs activities for 1.4 million customers across metro Atlanta and the northwest corner of the state.

Bentina is actively involved in the community and feels fortunate to work for a company that has a passion for the communities it serves. She serves on the board of directors for the Midtown Alliance, Posse Foundation, Atlanta Police Foundation, the Atlanta Beltline Partnership, and the Atlanta Women’s Foundation. She is also on the advisory council for the BB&T Open. In 2017, she graduated from Atlanta Regional Commission’s Leadership Institute and has been named one of Atlanta Business League’s 100 Most Influential Women.

Bentina has had a diverse career with Southern Company, beginning in 2001 at Georgia Power. She has worked at Georgia Power, Gulf Power, and Southern Nuclear Operating Company, all Southern Company subsidiaries. In her career, she has been responsible for many different areas of the company including External Affairs, Legislative and Regulatory Affairs, Community and Economic Development, Corporate Communications, Sales and Marketing, Customer Service, Compliance and Ethics, Corporate Services and aspects of Power Delivery. She also served as General Counsel of Southern Nuclear. Bentina began her career practicing law with Troutman Sanders law firm in Atlanta and also served as the Associate General Counsel at Progress Energy in Raleigh, NC prior to coming to Southern Company.

A native of Fayetteville, N.C., Bentina holds a Juris Doctorate degree from the University of Michigan Law School and a Bachelor of Arts in English from North Carolina State University. She is a member of the North Carolina State Bar and the Georgia State Bar, Leadership Atlanta, Leadership North Carolina, Leadership Florida, the International Women’s Forum and Alpha Kappa Alpha Sorority, Inc. She has received various awards and recognitions for her contribution to the state of Florida and northwest Florida including being named one of Influence Magazine’s 100 Most Influential People in Florida Politics (2015), 850 Magazine’s Pinnacle Award (2014), Florida Chamber Foundation’s Chair Award (2014), the Pensacola Chamber of Commerce’s Community Leader of the Year (2013), and one of the Florida Diversity Council’s Most Powerful and Influential Women (2012). She has been selected as a member of the “IN Power List” recognizing the top 100 most powerful and influential people in greater Pensacola area for seven consecutive years (2009-2016) and was named #1 in April 2016. She was also an International Women’s Forum (IWF) Fellow in 2012.

She is married to Antonio Terry and they have one dog, Bubba.