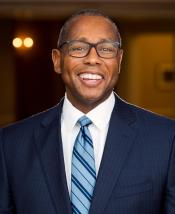 Prior to his current responsibilities, Patton served in numerous executive positions throughout his tenure with AEP. He has been the president and chief operating officer of two AEP subsidiaries: Appalachian Power, serving approximately one million customers in West Virginia, Virginia and Tennessee; and AEP Texas, serving over one million in South and West Texas. Other roles at AEP have included executive vice president, AEP Utilities West and senior vice president, Regulatory and Public Policy.

During his tenure in Texas, Patton was appointed by Texas Gov. George Bush to serve on the Texas Energy Coordination Council and the Interstate Oil and Gas Compact Commission. Later, Gov. Rick Perry appointed Patton to the Texas Energy Planning Council, which was established to advise the governor on energy matters.

In 2014, he was appointed to a three-year term as director of the Fifth District Federal Reserve Bank, in Richmond, Va. In this position, he chaired the Federal Reserve's Information Technology Committee, which coordinated IT services for the entire Federal Reserve System. He currently serves on the board of Sterling Construction, a large engineering and construction company located in Houston.

Throughout his career, Patton has served and chaired numerous professional and civic organizations in the communities in which he has lived. Today, he serves on the boards of the National Association of Manufacturers, Center for Workforce Development and the Columbus YMCA. At AEP, he is an executive sponsor of the African-American Employee Resource Group (AAERG).

He is a graduate of Bowdoin College, located in Brunswick, Maine, and holds a graduate degree from The University of Texas LBJ School of Public Policy. He is married with two adult children.