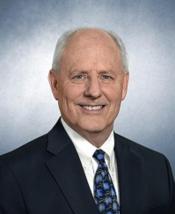 Dale A. Walsh, 60, is vice president of Corporate Affairs for Chevron Corporation, a position he assumed in March 2019. He is responsible for overseeing government affairs, public affairs, social investment and performance, and the company’s worldwide efforts to protect and enhance its reputation.

Previously Walsh served as president, Americas Products, and was responsible for Chevron’s fuel products supply chain in North and Latin America, including overseeing the optimization of its value chain, from refining to marketing. He was also responsible for the marketing, sales and delivery of Chevron and Texaco brand fuel products to retail, wholesale, commercial and industrial, and aviation customers.

Walsh has served in a number of leadership positions with increasing responsibility, including president, Lubricants and vice president, Latin America, Global Marketing.

Walsh serves on the board of directors of the San Francisco 49ers Foundation.

Walsh joined Chevron in 1983 in the U.S. Marketing organization in La Habra, California. He earned a bachelor’s degree in marketing from Golden Gate University in 1981 and a master’s degree in business administration from California State University, Sacramento, in 1983.