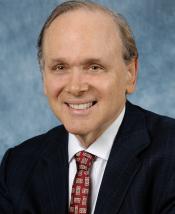 Daniel Yergin is a highly respected authority on energy, international politics, and economics and a Pulitzer Prize winner. Fortune called him "one of the planet's foremost thinkers about energy and its implications."  He is Vice Chairman of IHS Markit, a world leader in critical information, analytics and solutions for the major industries, governments, financial institutions, and markets Dr. Yergin is also Founder of IHS Cambridge Energy Research Associates.

Dr. Yergin is the author of the bestseller The Quest: Energy, Security, and the Remaking of the Modern World. The Economist called The Quest “a masterly piece of work” and the Financial Times said it is “a triumph.” The New York Times said it is “necessary reading for C.E.O.’s, conservationists, lawmakers, generals, spies, tech geeks, thriller writers,” among many others.

Dr. Yergin is known around the world for his book The Prize: the Epic Quest for Oil Money and Power, which was awarded the Pulitzer Prize. It became a number one New York Times best seller and has been translated into 20 languages.

Dr. Yergin co-authored Commanding Heights: the Battle for the World Economy of which, The Wall Street Journal said, “No one could ask for a better account of the world’s political and economic destiny since World War II.” Both The Prize and Commanding Heights were made into award-winning PBS-BBC documentaries.

In 2014, the Prime Minister of India presented Dr. Yergin with “Lifetime Achievement Award” and the U.S. Department of Energy awarded him the first “James Schlesinger Medal for Energy Security.” In 2015, the University of Pennsylvania presented him with the first Carnot Prize for “distinguished contributions to energy policy.”   Dr. Yergin was awarded the United States Energy Award for “lifelong achievements in energy and the promotion of international understanding.”

Dr. Yergin is a director of the Council on Foreign Relations and a trustee of the Brookings Institution.  He is a member of the National Petroleum Council, and on the advisory boards of the Massachusetts Institute of Technology Energy Initiative, Columbia University’s Center on Global Energy Policy, and Singapore’s International Energy Panel. He is a “Wise Man” of the International Gas Union and became an Adjunct Professor at the China University of Petroleum in Beijing.