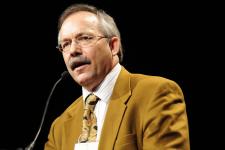 Prior to working at the Department of Energy, David Foster served as the founding Executive Director of the BlueGreen Alliance (BGA), a strategic partnership of 14 of America’s most important unions and environmental organizations with a combined membership of 14.5 million.

From 1990-2006, he was the Director of United Steelworkers (USW), District #11, a 13 state region based in Minneapolis, MN.  His responsibilities included serving on the union’s International Executive Board and negotiating labor agreements with many of the country’s largest steel, iron ore and aluminum companies.

From 2003-2010, he taught graduate classes on globalization, sustainability, and labor relations at the Carlson School of Management at the University of Minnesota.