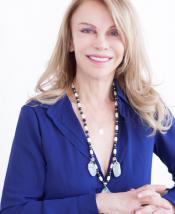 Graciela Chichilnisky is a world-renowned economist and mathematician, the creator of the Carbon Market of the UN Kyoto Protocol, the concept of Basic Needs and the formal theory of Sustainable Development. She was the Lead US Author of the Intergovernmental Panel on Climate Change, which received the Nobel Prize in 2007. Her pioneering work uses innovative market mechanisms to Columbia University and currently a visiting professor at Stanford University. She acts as a special adviser to the UN, the IMF and the World Bank, is a TED speaker and speaks frequently in CNN ABC and BBC.

Chichilnisky is the Co-Founder and CEO of Global Thermostat, an award-winning company in which she co-invented a "Carbon-Negative Technology"TM that captures CO2 from air at low cost transforming it into profitable assets such as biofuels, beverages and polymers and building carbon negative power plants, a company that FORBES and KPMG say can reverse climate change.

Most recently in 2018, she became a member of the Board of Transition Monaco Forum under the High Patronage of H.S.H. Prince Albert II of Monaco, a global platform committed to accelerating the transition toward a clean future across all sectors and industries. She also authored the 2018 book, “The Handbook of the Economics of Climate Change.” Her next title, “Reversing Climate Change,” is in final production. On July 17, 2018 she was featured in the Wall Street Journal, for receiving the Albert Nelson Marquis (“Who’s Who”) Lifetime Achievement Award. On August 22, 2018, she will deliver the international keynote address at the 18th Energy in Western Australia Conference in Perth, Australia.