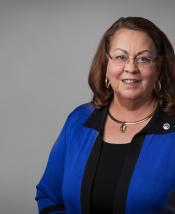 As former President and Chief Executive Officer of Noblis, Dr. Thomas was responsible for the general management and direction of the company’s overall technical, financial, and administrative activities. Noblis is a nonprofit science, technology and strategy organization working at all levels of government, in private industry and with other nonprofits in areas that are essential to our nation’s well being: national and homeland security, public safety, transportation, health care, criminal justice, energy and the environment, and oceans, atmosphere and space. Dr. Thomas is now a member of the Board of Trustees of Noblis.

Dr. Thomas was elected to the Board of Trustees of Noblis (formerly known as Mitretek Systems Inc.) in May 1996 and president and chief executive officer in July 1996. Previously, as a Senior Vice President and General Manager, Dr. Thomas was responsible for strategic planning and leadership of Noblis’ Center for Environment, Resources and Space.

Prior to Noblis, Dr. Thomas was with The MITRE Corporation from 1973 to 1996. At MITRE, she held a series of technical and management positions, spanning the areas of energy, environment, health, and communications systems.

In 2002, Dr. Thomas was appointed by President Bush to serve as a founding member of the President’s Homeland Security Advisory Council where she continues to serve at the pleasure of President Obama and Secretary Napolitano. She was twice appointed to serve as a member of the Virginia Research and Technology Advisory Commission, first by Governor George Allen and a second term appointment by then Governor Mark Warner. Governor Warner also appointed her to the Virginia Governor’s Higher Education Summit Steering Committee. In 2008, Dr. Thomas was appointed by Gov. Kaine to the Governor’s Commission on Climate Change.  She serves on the Board of Directors of the Cabot Corporation, Mueller Water Products, Inc. , Washington Mutual Investors Fund, the United States Energy Association (USEA), the Northern Virginia Technology Council (NVTC), the Conference Board and is a member of the Charles Stark Draper Laboratory.  In 2005 she was appointed co-chair of the Government University Industry Research Roundtable (GUIRR) of the National Academies and is still serving in this position.

Dr. Thomas served as Vice Chair of the Board of Trustees, Chair of the Committee on Academic Affairs and on the Advisory Board of the Research and Technology Campus of The George Washington University.

Active in the local community, Dr. Thomas is a member of the Posse Foundation Advisory Board, a Trustee of the INOVA Health System and a member of the Northern Virginia HealthForce.

Dr. Thomas has served, as a member of the IT Professional magazine Editorial Advisory Board.  She has appeared as an expert witness on behalf of the U.S. government at various public hearings and before the U.S. Congress, and has co-authored one book and written many technical reports.

In 2002 Dr. Thomas was elected to the Council on Foreign Relations. She was named one of The Most Important Blacks in Technology in 2005 and 2006. She was also named as one of the 50 Most Important Blacks in Research Science in 2004. Dr. Thomas was honored as the 2003 Black Engineer of the Year at the 17th Annual Black Engineer of the Year Awards Conference and Celebration. She received a Certificate of Recognition and Appreciation for her contributions to the technology economy in Fairfax County from the Fairfax County Commission of Women in February 1998; the Deans' Award at the 1991 Black Engineer of the Year Conference; the 1990 "Ebone" Image Award presented by The Coalition of 100 Black Women, Northern Virginia Chapter, for outstanding achievement in the public service; and was the recipient of the 1986 TWIN Award (Tribute to Women in International Industry) presented by the Young Women's Christian Association, National Board.