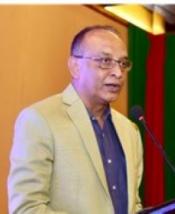 Mollah M Amzad Hossain has been working in Bangladesh’s media since 1982. During his long 38 years of experience in journalism, he has been publishing and editing the country’s first and only energy sector magazine ‘Energy & Power’, begun in 2003. Before bringing out his own publication, he worked with different newspapers of the country.

Mr. Mollah developed his expertise on the energy sector though having initial reporting command over diverse fields like trade and business, environment, politics, and aviation. He has covered several international and regional events on energy, trade and business. He also has attended different international conferences and meetings as a resource person and a panelist, and in some cases, presented papers on the energy sector.

Mr. Mollah is often invited to take part in TV talk shows as an energy and environment analyst. His special interest is in the fields of media, communication, energy, environment, IT, travel, reading, and community development.