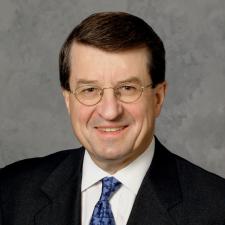 Peter J. Robertson is the 2010 recipient of the United States Energy Award, and he is Senior Advisor, Oil & Gas, for Deloitte LLP.  Robertson previously served as USEA Chairman, Vice Chairman and as a member of the USEA Board of Directors.  Robertson retired on April 30, 2009 from Chevron Corporation in the position of Vice Chairman of the Board of Directors.  He began his career with Chevron in 1973 and served in a number of leadership positions including:

His involvement with USEA came at a time when the Association’s visibility and reputation were growing significantly, in a large part due to the participation and involvement of Chevron as a corporate member and Peter Robertson personally.  USEA gained prominence in the oil and natural gas sectors due to the visibility of an industry leader such as Peter Robertson.

In April of 2010, Robertson became an independent senior advisor to the Deloitte Center for Energy Solutions.  He also is a director of Jacobs Engineering, Universal Pegasus International, Resources for the Future; serves as Co-Chairman of the U.S.-Saudi Arabian Business Council, Chairman of the World Affairs Council of Northern California and is Vice-Chairman of the International House at the University of California, Berkley.

Exporting the American Renaissance: Global Impacts of LNG Exports from the United States