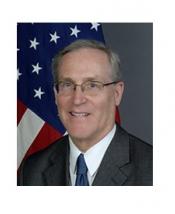 Dr. Robert F. Ichord, Jr. is a nonresident senior fellow at the Atlantic Council’s Global Energy Center. He comes to the Atlantic Council after almost forty years of US Government service in advancing US international energy interests. He retired in January 2016 from the US Department of State, where he served as deputy assistant secretary for energy transformation in the Energy Resources Bureau from 2011 to 2015. He recently established Ichord Ventures LLC, which provides energy analysis and consulting services to both the private and public sectors.

At the US State Department, he helped launch the new Energy Resources Bureau established by Secretary Clinton and worked to further US foreign policy interests in energy security, sustainable development, and global climate change. He shaped US policies and programs in clean energy with a special focus on electricity sector transition, improving energy efficiency, commercializing renewable energy technologies, and increasing energy access in emerging nations.

Prior to working for the US State Department, Ichord worked for the US Agency for International Development (USAID) in the Europe and Eurasia Bureau as Chief of Energy and Infrastructure.  He managed and supported over $500 million in energy and infrastructure projects in Eastern Europe and the former Soviet Union, and led US efforts to further energy transition and promote private investment in the region. He initiated the first US energy assistance programs in Eastern Europe in 1990-91 and in the New Independent States in early 1992. He created innovative, cost-sharing private public partnerships linking US utilities, regulators, and industrial companies with counterparts in Europe. He played a leading role in interagency efforts to close and improve the safety of high- risk, Soviet nuclear reactors, helping to craft and negotiate the G-7 agreement and follow-on programs to close the remaining Chernobyl reactors and those in Bulgaria and Lithuania.  From 1979-1989, he was chief of energy and natural resources in the Asia, Near East, and Europe Bureau, playing a key role in developing $1 billion of new energy assistance projects in power generation and distribution, energy efficiency, and rural energy systems, and helped pioneer the concept of private power in Asia.

Brown Bag Discussion on Reliability Challenges and Solutions: What can the U.S. learn from Europe about integrating intermittent renewables?