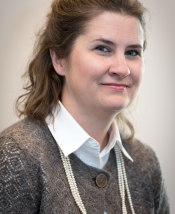 Sarah Blanford has worked at USEA since 2001, bringing together key energy sector executives to address critical issues in the areas of utility management, and regulatory and legislative reform.  Since 2005, her focus has been on USAID-funded assistance projects for South Asian utilities, regulatory and government agencies.  She is currently involved in several USAID-funded projects, including the U.S.-Afghanistan Utility Partnership and the South Asia Regional Initiative for Energy Integration, which covers Afghanistan, Bangladesh, Bhutan, India, Maldives, Nepal, Pakistan, and Sri Lanka.

Prior to her current work, Ms. Blanford organized USEA’s activities with the U.S. Department of Energy and the U.S. Trade & Development Agency, including over 20 international conferences and partnerships hosted by the U.S. government, the International Energy Agency and the World Energy Council.

During her tenure, Ms. Blanford has contributed her expertise in South Asian energy sector reform to the Energy Partnership Program and other USEA activities.

Ms. Blanford holds a Master of Public Administration from the University of North Carolina at Chapel Hill, with a certification in Nonprofit Management, and Bachelor of Science from the College of Wooster.