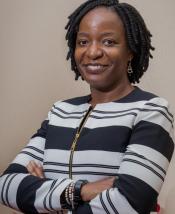 I hold a bachelor’s degree in Quantitative Economics and a master’s degree in Economic Policy Management, both from Makerere University in Uganda. With my educational background, I have been privileged to serve in the Government of Uganda Ministry of Finance, Planning and Economic Development in a number of capacities from 2002 to-date, thus gaining a wealth of experience in public sector budgeting and policy as well as debt management and policy formulation.

While at the Ministry, I was part of the team that spearheaded the design of major budget reforms such as Output Oriented Budgeting (OOB) and Program Based Budgeting (PBB); from which Government of Uganda has reaped substantial efficiency gains. I successfully negotiated with multinational and financial institutions for financing of infrastructural and social services development projects hence advancing the Country’s economic development agenda.

Looking back to the period January - July 2009, I was privileged to serve on the Board of Trustees for the Uganda Wildlife Education Centre.

I was then appointed as Member of the Council, Kyambogo University, Uganda in November 2011 where I played an oversight role up to July 2013.

Propelled by the spirit of service, I was appointed as Member, Board of Trustees, Uganda Wildlife Authority in January 2014 where I served the Authority diligently until April 2015. The same Authority thereafter found it desirous to seek my contribution in February 2016, which oversight role I have played to-date.

I was then appointed to play a critical role as Member Board of Trustees at Uganda Tourism Board in May 2017 where I served up to February 2018.

In a similar spirit of service, I been playing an oversight role on the Board of Uganda Electricity Generation Company Ltd, a position I have held since November 2013 and contributed tirelessly to the company’s transformation journey.