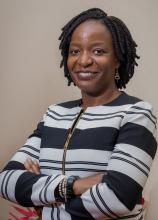 I hold a bachelor’s degree in Quantitative Economics and a master’s degree in Economic Policy Management, both from Makerere University in Uganda. With my educational background, I have been privileged to serve in the Government of Uganda Ministry of Finance, Planning and Economic Development in a number of capacities from 2002 to-date, thus gaining a wealth of experience in public sector budgeting and policy as well as debt management and policy formulation.

While at the Ministry, I was part of the team that spearheaded the design of major budget reforms such as Output Oriented Budgeting (OOB) and Program Based Budgeting (PBB); from which Government of Uganda has reaped substantial efficiency gains. I successfully negotiated with multinational and financial institutions for financing of infrastructural and social services development projects hence advancing the Country’s economic development agenda.

Looking back to the period January - July 2009, I was privileged to serve on the Board of Trustees for the Uganda Wildlife Education Centre.

I was then appointed as Member of the Council, Kyambogo University, Uganda in November 2011 where I played an oversight role up to July 2013.

Propelled by the spirit of service, I was appointed as Member, Board of Trustees, Uganda Wildlife Authority in January 2014 where I served the Authority diligently until April 2015. The same Authority thereafter found it desirous to seek my contribution in February 2016, which oversight role I have played to-date.

I was then appointed to play a critical role as Member Board of Trustees at Uganda Tourism Board in May 2017 where I served up to February 2018.

In a similar spirit of service, I been playing an oversight role on the Board of Uganda Electricity Generation Company Ltd, a position I have held since November 2013 and contributed tirelessly to the company’s transformation journey.

"I graduated with a bachelor’s degree in Quantitative Economics in 1999 and attained a master’s degree in Economic Policy Management in 2002, both from Makerere University.

My current role as Head of External Debt Division, Debt Policy and Issuance Department at the Ministry of Finance Planning and Economic Development (MoFPED) and Board Director of Uganda Electricity Generation Company Limited (UEGCL) has been shaped by the exposure and insights and further strengthened by my previous training as an Economist coupled with the wealth of experience progressively gained as part of my contribution to public sector budgeting and policy formulation.

This brief background explains my knowledge and prowess in key disciplines including public financial and utility management, macro-economic/sectoral planning and infrastructure, gender policy formulation and corporate governance which ties in well with the roles I am currently performing."

Subsequently, Government of Uganda has fast tracked gender mainstreaming by embracing the role of Women in leadership as can be evidenced by the composition of women in top leadership positions within the energy sector. Noteworthy among these are: The Hon. Minister of Energy and Mineral Development, the CEO of Electricity Regulatory Authority, The CEO of the Uganda National Oil Company (UNOC), The CEO of Eskom Uganda Limited, Board of Directors of the Uganda National Oil Company and Uganda Electricity Generation Company Limited; whose composition is over 40% women.  This practice has been backed up by the research revelation that "Companies with 3 or more Women on Board of Directors out performed those with no women at all in terms of profitability and productivity.""

"UEGCL is an “equal opportunity employer” and all efforts are made to articulate this in the laid down company policies in relation to recruitment and talent management. Cognizant of the technical orientation of UEGCL as an organization where over 70% of the jobs are field based, the existing human resource policy and management systems are under review to create more inclusive and diverse working environments that are able to accommodate women’s pre- and post-maternity needs. It is envisaged that once this is achieved, UEGCL shall achieve progressive growth in the number of women in senior management positions.

In addition, resources have been earmarked to empower our female staff with leadership skills through appropriate leadership development programs; which forms part of the succession planning initiative."

"I am delighted to inform you that UEGCL has had the opportunity of being steered by 3 women Board Directors at the helm of its leadership. The trio with their wealth of knowledge and expertise in engineering, policy formulation, management and governance have been very pivotal and can bear witness to the transformational story of UEGCL.

One cannot rule out the leadership role played by women in some critical UEGCL functions such as Human Resource, Risk, Strategy and Business Performance with a 25% women representation at top management as well as having 27% middle-level manager positions occupied by women. This further demonstrates a positive trend of inclusion and diversity; which can only be progressively improved upon."

"UEGCL has a fairly well-structured capacity development programme which encourages participation of all staff regardless of gender. In the view of the need to build a culture of more inclusion and diversity, leadership development with a special focus on women is being considered as a high priority on the agenda. Such capacity building initiatives are envisaged to propel more women into leadership positions who shall in turn serve as role models and mentor other female staff.

However, in as much as gender diversity is accorded due consideration in recruitment and talent management, it is yet to be formally incorporated into our performance measurement and reporting system."

6. What actions should the energy and electricity sector be focused on to accelerate change, increase diversity, and foster a better gender balance in the boardroom?

"Gender Mainstreaming is already provided for as a matter of National policy. The Government of Uganda has put in place a framework that aims at ensuring that all programs, policies, initiatives address gender equality, diversity and inclusion."

That notwithstanding, the policy makers need to create platforms for best practice benchmarking so as to learn from the experiences of various policy implementers. This will clearly bring out the associated gaps and good practices; which shall inform further policy directions intended to enhance gender balance in the boardroom. Policy guidance on proportion of women in senior management; which could be allowed to grow over time is an important consideration to this effect.

In as much as gender balance is desirable in the boardroom, it is important that the persons selected have the required capacity to effectively influence the policy agenda. Thus, women need to be further facilitated with leadership development programs akin to boosting their leadership capabilities so as to allow them to favorably compete with their male counterparts for boardroom representation."