Through funding from the USAID Office of Global Climate Change, USEA launched a program focused on improving system flexibility in Asia.  The System Flexibility for Asia Partnership was formed through a collaboration between USAID’s Office of Global Climate Change, Office of Energy & Infrastructure, USAID/India’s Greening the Grid (GTG) program and USEA.  The GTG program is assisting the Government of India (GOI) in integrating large-scale, variable renewable energy (VRE) into the existing power grid. Critical to it is rigorous analytical support to identify grid stability issues, options for optimizing despatch, and sources of potential flexibility. Pilot projects are at the core of the GTG Program.  The SFA Partnership assists with two of GTG’s pilots – (1) the Battery Energy Storage System (BESS) in Transmission Pilot and (2) the Flexible Power Generation Pilot.  The BESS in Transmission Pilot will test the techno-economic effectiveness of grid connected BESS in providing balancing energy services, other ancillary services, deferring network upgrades, capacity firming of Variable Renewable Energy (VRE) generators, peak shaving, etc. This pilot will also contribute to interconnection standards for grid connecting BESS and for estimating the systemic value of storage in the Indian power system, necessary to devise policies and regulations supporting deployment of BESS.  The Flexible Power Generation Pilot integration studies have revealed the criticality of thermal based units in India for providing balancing support through flexing.  The SFA activities are intended to build upon the technical work already done under these two pilots.

India plans to deploy unprecedented levels of renewable energy on its power grid – 500 GW (note: this target may include large hydro) installed capacity of renewable energy by 2030.  (Current estimates stand at approximately 75 GW of installed RE capacity at the end of 2018.)  Further, India, the world’s third-largest emitter of greenhouse gases, has pledged to cut emissions and have clean energy account for at least 40 percent of its installed capacity by 2030, up from 21.4 percent now, while looking to manage its energy appetite as its population becomes more prosperous.

However, compared to conventional power, India’s key RE options are more variable, less predictable and often further from demand centers.  Experience in other systems has shown that when penetration of RE reaches significant levels, the capacity of the power grid to manage it has to be addressed to avoid challenges to the reliability and affordability of electricity.  Critical to integrating variable renewable energy (VRE) into the power system is identifying sources of potential flexibility.  Additionally, most Indian states are already experiencing a surplus of power.

A significant component of India’s future success in expanding renewable energy supplies is the development of its capacity to plan and maintain grid stability and reliability while promoting flexibility throughout the power system.  This must be done by market systems and policies that encourage flexible operation, and identifying enabling policy, technology development and financing mechanisms.

The issues can be briefly summarized as follows:

The objective of this partnership is to provide capacity building to India and the South and Southeast Asian regions to support system flexibility.  The partnership will draw lessons from India to share with other South Asia and Southeast Asia countries, e.g. Philippines, Vietnam, Malaysia, Bangladesh, Pakistan, and others.

The program targets a wide range of topics that provide potential improvement to grid flexibility, focusing on identifying policies, regulation, technical interventions, methods, and processes that can be replicated.  These topics may include, but are not limited to:

The applications through partnership activities that will be considered at this time include: 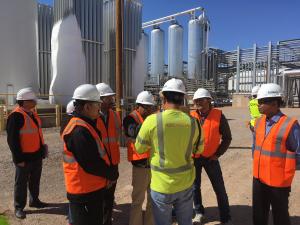