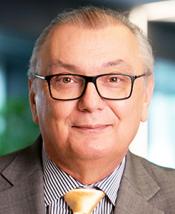 The Honorable Branko Terzic is an internationally recognized regulator, management consultant, and expert witness in the energy, public utility, and infrastructure industries.

Mr. Terzic’s four-decade career has included service as a commissioner on the State of Wisconsin Public Service Commission and Commissioner for the Federal Energy Regulatory Commission; international and domestic consulting to management and governments; and experience as the chairman, president, and chief executive officer of an NYSE-listed holding company with a subsidiary regulated public utility and unregulated operations.

In the United States, Mr. Terzic has experience as an expert witness before state public-service commissions and committees of Congress. His international energy experience includes serving as regional managing partner for a major professional services and audit firm in central and eastern Europe and chairmanship of an international committee of experts on cleaner electricity under the UN Economic Commission for Europe.

US Association for Energy Economics
Member