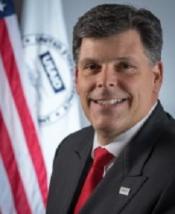 Brock Bierman was sworn in on January 8, 2018 as Assistant Administrator for USAID’s Bureau for Europe and Eurasia.  Mr. Bierman brings considerable experience to the Bureau from previous leadership positions with the Rhode Island House of Representatives, USAID, FEMA, Department of the Interior, and the private sector, as well as extensive knowledge of the region.  Prior to his current appointment with USAID, Bierman spent more than twenty years in the private sector as a successful entrepreneur, launching two small businesses from the ground up.

Throughout his career in public service, Bierman has demonstrated a commitment to expanding transformative development across Eastern Europe and Eurasia.  From 2002-2007, he served as Chief of Staff in USAID’s Bureau for Europe and Eurasia, where he helped implement strategic priorities for the Bureau and provided oversight of conflict mitigation, democracy, health, and trade initiatives within the region.  Bierman also managed all aspects of the Bureau’s public outreach activities.  Following his post at USAID, Bierman was designated Small State and Rural Advocate by President George W. Bush while also holding the position of Director of the Community Preparedness Division at the Federal Emergency Management Agency from 2007-2008.  While at FEMA, Bierman led a program to recruit, train, and monitor nearly one million emergency management volunteers on a $20 million budget.  From 2008-2009, he served as Senior Advisor to the Secretary in the Department of the Interior, where he helped support a successful transition to the new administration.

A native of Rhode Island, Bierman received a bachelor’s degree in journalism from Bowling Green State University in Ohio.

Utility Cybersecurity In the Time of COVID-19 (webinar)