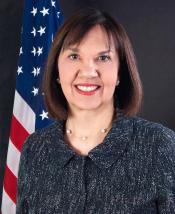 Cheryl A. LaFleur is a nationally-recognized energy leader. She is a Distinguished Visiting Fellow at the Columbia University Center on Global Energy Policy, focusing primarily on the adaptation of the electric and natural gas sectors to the challenges of climate change. LaFleur also serves on the Board of Directors of ISO New England, the independent, not-for-profit organization that plans and operates the power system and administers wholesale electricity markets for the New England region.

Previously, LaFleur was one of the longest-serving commissioners on the Federal Energy Regulatory Commission (FERC). nominated by President Obama in 2010 and 2014 serving until August 2019. She served as Chairman was 2014-15 and as Acting Chairman from 2013-14 and during 2017. She successfully navigated nearly a decade of change in the nation's energy industry, power supply, and political leadership, helping FERC respond effectively to major energy challenges and opportunities across the electric, natural gas, and oil sectors.

LaFleur helped lead the FERC's work to adapt the nation's energy markets and infrastructure to ongoing changes in the nation's resource mix due to the growth of gas and renewables and to changing climate and environmental goals. She also played a leading role in FERC's efforts to assure reliability and security of the energy grid in response to emerging security threats.

Earlier in her career, LaFleur had more than 20 years’ experience as a leader in the electric and natural gas industry. She served as executive vice president and acting CEO of National Grid USA, responsible for the delivery of electricity to 3.4 million customers in the Northeast. She led major efforts to improve reliability and employee safety, and led award-winning conservation and demand response programs for customers.

Women In Energy: Cheryl A. LaFleur