Skip to main content
Women In Energy: Cheryl A. LaFleur

Women In Energy: Cheryl A. LaFleur 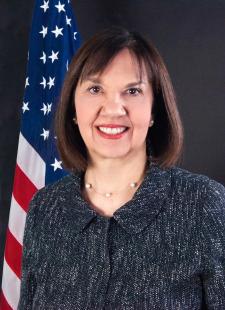 Cheryl A. LaFleur is a nationally-recognized energy leader. She is a Distinguished Visiting Fellow at the Columbia University Center on Global Energy Policy, focusing primarily on the adaptation of the electric and natural gas sectors to the challenges of climate change. LaFleur also serves on the Board of Directors of ISO New England, the independent, not-for-profit organization that plans and operates the power system and administers wholesale electricity markets for the New England region.

Previously, LaFleur was one of the longest-serving commissioners on the Federal Energy Regulatory Commission (FERC). nominated by President Obama in 2010 and 2014 serving until August 2019. She served as Chairman was 2014-15 and as Acting Chairman from 2013-14 and during 2017. She successfully navigated nearly a decade of change in the nation's energy industry, power supply, and political leadership, helping FERC respond effectively to major energy challenges and opportunities across the electric, natural gas, and oil sectors.

LaFleur helped lead the FERC's work to adapt the nation's energy markets and infrastructure to ongoing changes in the nation's resource mix due to the growth of gas and renewables and to changing climate and environmental goals. She also played a leading role in FERC's efforts to assure reliability and security of the energy grid in response to emerging security threats.

Earlier in her career, LaFleur had more than 20 years’ experience as a leader in the electric and natural gas industry. She served as executive vice president

and acting CEO of National Grid USA, responsible for the delivery of electricity to 3.4 million customers in the Northeast. She led major efforts to improve reliability and employee safety, and led award-winning conservation and demand response programs for customers.

"I have only had three long-term jobs in my career, and they each built on each other, although at times in unexpected ways. After being educated as a lawyer, I worked in a law firm for eight years. From there got a part-time job as a lawyer at an electric company (New England Electric System, now National Grid) when my children were young. I quickly learned that I loved working on energy issues. I ended up staying 21 years, in legal and management positions of growing responsibility. That career experience gave me the visibility to be considered for a nomination as a FERC Commissioner, an unexpected opportunity that led to nine amazing years on the Commission. Since leaving FERC, I have been working in board and academic roles, including on the board of ISO-New England and most recently as a fellow at the Columbia University Center on Global Energy Policy."

"I have definitely seen more women in all parts of the energy sector than early in my career, and with that critical mass has come the gradual growth in the number of women in leadership. One particular change I have observed is in the fields from which leaders are drawn. When I started in energy in the 1980s, it seemed that most senior leaders had come from engineering or technical fields, which were then nearly exclusively male. More recently, given the changes and challenges in the industry, I have observed more leaders coming from the regulatory and legal organizations within companies, which tend to have larger numbers of women. I believe this trend has contributed to more opportunities for women to rise in their organizations."

"Since I am not currently in a single organization, I will speak to what I have seen work over the course of my career, especially during my time at FERC and in my current roles with ISO-New England and Columbia. The most effective strategies I have seen are:

1. First of all, actually put women in positions of which they are capable. Nothing speaks more loudly about an organization’s concern about gender diversity (or any other aspect of diversity) than the people whom they actually promote. Each senior woman is a role model for others.

2. In order to achieve #1, recruit and retain a critical mass of talented women, and actively develop them, including by giving them opportunities to learn in different parts of the organization. I was very fortunate to have a mentor early in my career, John Rowe (then CEO of New England Electric System), who created opportunities for me to move to different jobs around the company.  He used to say “never be afraid to give an opportunity to someone you think can do a job,” even if they are not the obvious choice. I have tried to apply those words as I choose people for positions, and have repeated them to others many times.

3. Establish supportive policies for working parents, including women, and try to implement them in spirit as well as in law. In my generation, many talented women started their careers in high-profile roles, then fell off the ladder when they tried to navigate their child-bearing years.

4. Create opportunities for women across your organization to know and learn from each other, including through affinity or networking groups. This is especially important for women who may be in parts of the organization without a lot of female colleagues. It is a different way of achieving critical mass.

5. Be mindful of subtle or symbolic messages you send. For example, try to ensure that panels or lineups of speakers at both internal and external events include diverse groups of speakers. If this seems impossible, ask yourself why, and redouble your efforts to develop diverse workgroups."

"I have seen a definite growth of women in senior positions across all the organizations I am associated with, and have tried hard to encourage that, for example when I was chairman at FERC. However, this is definitely a work in progress nearly everywhere. I am sometimes concerned that workplaces are so much more diverse than they used to be, and we have so many other issues to think about, that we as a society won’t feel the need to keep pushing on gender diversity. Until we walk into a group of senior leaders from across the energy sector and it looks like the community at large, we aren’t “there” yet."

"I know that ISO-New England, where I am privileged to be on the board, has worked hard to put in place programs and efforts to recruit and develop a diverse workforce, including women. These efforts include examples of the steps I outlined above. The organization has also brought in an outside consultant to ensure they were learning from successful programs at other organizations, launched a Council for Diversity and Inclusion and women’s focus groups, and participated actively in external groups that support women in energy. At the Columbia Center on Global Energy Policy, which I just joined, their Women in Energy program works to connect and develop women across the energy industry, and I look forward to being part of their efforts."

"In addition to the items I listed in response to question 3 above, I would add the imperative to be involved in the educational community, to develop and recruit a diverse group of future leaders. Whereas many in my generation, like me, moved sideways into an energy career, more young people today are actively seeking to work in energy and environmental fields in the future. We need to encourage this and be sure they are given the background they need to succeed. Given all the energy and climate challenges we face, we need the best and the brightest of the next generation working on them, and we can’t leave any part of that generation behind." 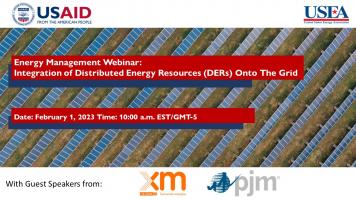 Energy Management Webinar: Integration of Distributed Energy Resources (DERs) Onto The Grid with XM and PJM