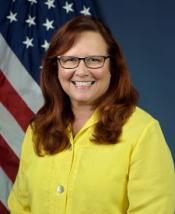 On August 7, 2017, Ms. Drue Pearce was appointed to be the Deputy Administrator for the Pipeline and Hazardous Materials Safety Administration (PHMSA).

Ms. Pearce came to USDOT from Holland & Hart LLP, where she served as Director of Government Affairs focused on the energy, natural resource and manufacturing industries. For six years beginning in 2010, she was a Senior Policy Advisor at Crowell & Moring LLP. In both positions, she split her time between the D.C. and Alaska offices.

Ms. Pearce has an extensive background in federal transportation and pipeline safety. In 2006, she was named as the Federal Coordinator for Alaskan Natural Gas Transportation Projects, where she oversaw efforts to advance the nation's energy, environmental, and economic security by expediting the delivery of Alaska natural gas to North American markets via pipeline.

Prior to that, Ms. Pearce served as Senior Advisor to the U.S. Secretary of the Interior.  She was named by the Secretary to the Exxon Valdez Oil Spill Trustee Council on behalf of the Department of the Interior. In addition, she was appointed by Secretary of Transportation Norman Mineta to the Pipeline and Hazardous Materials Safety Administration Technical Pipeline Safety Standards Committee, a position she held for six years.

Prior to her federal service, Ms. Pearce served in the Alaska House of Representatives, where she became the Minority Whip in just her second term, and the Alaska State Senate, where she became the first woman to serve two terms as Senate President. She chaired Alaska Legislative Committees of jurisdiction that authored the complete rewrite of Alaska's oil and hazardous waste prevention, contingency planning, and response statutes, and was the prime sponsor of legislation to bring non-tanker vessels into compliance with prevention and response statutes.

Drue Pearce earned her Bachelor of Arts degree from Indiana University and her Masters of Public Administration from Harvard University's Kennedy School of Government.  She is also a graduate of the TEP at the University of Virginia Darden School of Business.