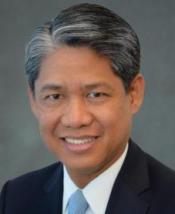 Gil C. Quiniones has served as President and Chief Executive Officer of the New York Power Authority (NYPA), the nation's largest state-owned electric utility, since 2011. He is responsible for developing and implementing the statewide utility's strategic vision and mission and for supervising its operations, legal and financial matters and relationships with external stakeholders.

Under his leadership, NYPA is currently playing a key role in the Governor's Reforming the Energy Vision initiative to use market forces and new technology to empower customers and encourage the growth of clean renewable energy and energy efficiency.

Mr. Quiniones is Co-Chair of the Board of Directors of the Alliance to Save Energy and serves on the Boards of the New York State Energy Research and Development Authority and the Large Public Power Council. He is also NYPA's principal representative to the American Public Power Association, from which he received the Alex Radin Distinguished Service Award in 2017. Quiniones was also named as the 2017 Smart Electric Power Alliance Power Player of the Year, an award that recognizes those on the front lines of energy transformation in the United States.

Mr. Quiniones was Co-Chair of the New York Energy Highway Task Force, which helped carry out Governor Andrew M. Cuomo's vision for reimagining New York State's energy system through partnerships between the public and private sectors. He also served as Chairman of the Board of Directors of the Electric Power Research Institute in 2015, the electric power industry's international research and development organization.

Before joining NYPA in 2007 as Executive Vice President of Energy Marketing and Corporate Affairs, Mr. Quiniones served in several positions in the administration of New York City Mayor Michael R. Bloomberg, including more than four years as Senior Vice President of Energy and Telecommunications. He previously worked for Con Edison for 16 years and was one of four co-founders of Con Edison Solutions, the utility's unregulated energy services company.