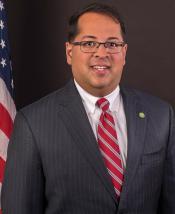 Chairman Neil Chatterjee was nominated to the Federal Energy Regulatory Commission by President Donald J. Trump in May 2017 and confirmed by the U.S. Senate in August 2017. He served as Chairman from August 2017 to December 2017, and was again named Chairman on October 24, 2018. Prior to joining the Commission, he was energy policy advisor to U.S. Senate Majority Leader Mitch McConnell (R-KY).

Over the years Chairman Chatterjee has played an integral role in the passage of major energy, highway, and agriculture legislation.

Prior to serving Leader McConnell, Chairman Chatterjee worked as a Principal in Government Relations for the National Rural Electric Cooperative Association and as an aide to House Republican Conference Chairwoman Deborah Pryce (R-OH). He began his career in Washington, D.C., with the House Committee on Ways and Means.

A native of Lexington, KY, he is a graduate of St. Lawrence University and the University of Cincinnati, College of Law. Chairman Chatterjee is married and has three children.