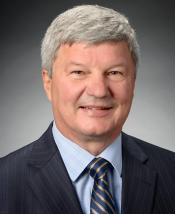 Jay D. Churchill is senior vice president, Health, Safety and Environment (HSE), and Projects, for Phillips 66, a diversified energy manufacturing and logistics company. He was appointed to the role in September 2016 and reports directly to Phillips 66 Chairman and CEO Greg Garland. Churchill has more than 35 years of experience in the oil and gas industry, with a focus on the downstream business.

He began his career with Conoco in 1979 as a plant process engineer at the Lake Charles Refinery in Louisiana. He went on to hold operating superintendent positions in the Billings and Lake Charles refineries. In 1994, Churchill became operations manager responsible for the safe and efficient startup of a $500 million lube oil hydrocracking project and worked in the Excel Paralubes joint venture. In 1998, he was transferred to the Houston office as strategy manager, Downstream, North America.

Churchill serves on the board of directors for the American Red Cross of Greater Houston. He graduated from the University of Minnesota with a Bachelor of Science in chemical engineering.