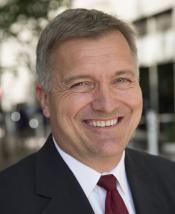 Prior to joining NRECA, Jim served as Principal, Public Policy Practice for the international law firm Squire Patton Boggs, based in Washington, D.C.

From 2001 to 2015, Jim was elected to serve as a United States Representative from Utah for seven terms. During his tenure on Capitol Hill, Jim was known as a legislator who was able to work with colleagues on both sides of the aisle.

He was Chief Deputy Whip for the House Democratic Caucus and served as co-chairman of the Blue Dog Coalition. Jim also was a member of the House Energy and Commerce Committee, as well as the Financial Services, Transportation and Infrastructure, and Science Committees.

Prior to entering government service, Jim worked in the energy industry for several years.

Jim was born and raised in Salt Lake City, Utah.  He received a Bachelor’s Degree in Government from Harvard University, and an MBA in Finance and Accounting from UCLA. Jim's wife, Amy, is a pediatrician, and they have two sons, William and Harris.

Electric Utilities and The 2050 Dilemma