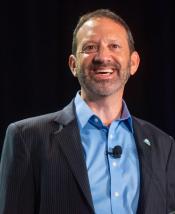 Before joining AEE, Malcolm served as the Cabinet-level head of the Maryland Energy Administration and energy advisor to Governor Martin O'Malley. He helped design and implement an ambitious sustainability legislative package that, a decade later, reduced Maryland’s carbon emissions more than any other state (30%) and resulted in lifetime energy savings in excess of $8 billion. During this time, Malcolm was twice elected chair of the National Association of State Energy Officials and recognized by Harvard’s JFK School for launching a project designated as “one of the top 25 innovations in American government.”

Woolf previously served as: director of the National Governors Association's Natural Resources Committee, counsel to the U.S. Senate Environment and Public Works Committee, senior attorney with the U.S. Environmental Protection Agency, and an associate at the law firms of Winston & Strawn and Piper & Marbury.