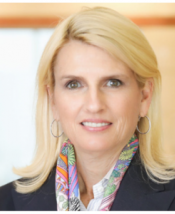 Michelle Bloodworth is President and Chief Executive Officer of America’s Power. In this role, Bloodworth represents the interests of the nation’s coal fleet before Congress, state and federal regulatory agencies, and the Administration and sets the association’s strategic agenda. America’s Power is the only national trade association whose sole mission is to advocate at the federal and state level on behalf of coal-fueled electricity and the coal fleet, responsible for supplying over twenty percent of U.S. electricity needs.

Before becoming President and CEO in 2018, Bloodworth served as Chief Operating Officer for America’s Power. In the past, she served as Executive Director of External Affairs for the Midcontinent Independent System Operator (MISO); Vice President of Business Development and State Affairs for America’s Natural Gas Alliance (ANGA); and Vice President of Marketing, Sales, and Communications for Energen/Alabama Gas Corporation. She began her career as a power plant engineer after graduating with a Bachelor of Science in Mechanical Engineering from Auburn University.

Over the last two decades, Bloodworth has worked with groups focused on utility, electricity markets, regulatory policies, and state affairs. Due to her expertise in the energy industry, she continues to serve as a resource for national groups, publications, state legislatures, and federal agencies on issues related to wholesale markets and regulatory policies impacting the coal fleet and the coal supply chain. She has recently participated in both PJM, and the North American Electric Reliability Corporation (NERC)’s fuel security initiatives and now serves as the Vice-Chair of the newly formed Affiliate Sector of MISO’s Advisory Committee, where she is actively involved in discussions around the reliability of the electric grid and market reforms within MISO. She was instrumental in the formation of two national trade organizations and currently serves on the National Coal Council, a Federal Advisory Committee to the U.S. Secretary of Energy, and on the board of directors at the Keystone Policy Institute.