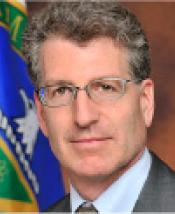 Prior to leading LPO, Mr. Davidson was Senior Advisor for Energy and Economic Development at the Port Authority of New York and New Jersey. Before this, from 2009-2011, he was the Executive Director of New York State’s economic development agency, the Empire State Development Corporation, where he oversaw such public/private partnerships as the Moynihan Train Station, Lower Manhattan Development Corp, Columbia University’s’ Manhattanville expansion, Brooklyn Bridge Park, and the Javits Convention Center.

Prior to his government service, Mr. Davidson was an entrepreneur who founded and managed six companies in the newspaper, broadcasting, out-of-home, advertising and marketing research businesses, many of which focused on Hispanic consumers. From 1989-2000, he was the owner and President of el diario/La Prensa, the leading Spanish language newspaper in New York. Earlier in his career, Mr. Davidson was an executive in the investment banking division of Morgan Stanley & Co.

Mr. Davidson is a graduate of Stanford University and Harvard University’s Graduate School of Business Administration.