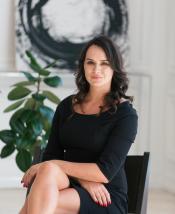 Suriya Evans-Pritchard Jayanti is an award-winning U.S. international energy legal and policy expert. Her expertise in the field is centered on Eastern Europe. Her overall focus is the geopolitics of energy and strategic energy policy.

Currently based in Washington, D.C., Ms. Jayanti served in the U.S. Diplomatic Corps for almost a decade, with tours in Kuwait, the Bahamas, Iraq, Ukraine and Washington.

Her most challenging assignment was as the Energy Chief at the U.S. Embassy in Kyiv, Ukraine, from 2018 to 2020. In that capacity, she worked closely with Ukrainian counterparts to help reform the country’s energy sector and establish energy security.

Prior to her diplomatic career, she worked as an energy attorney in Brussels and Washington, D.C. She previously worked for some years in journalism, most notably in Beirut at the Daily Star, the largest English-language newspaper in the Middle East.

Suriya has contributed to two textbooks and published in such venues as the International Energy Law Review and the Law Reviews at Georgetown, Rutgers, and American Universities.

Originally from Los Angeles, California, she holds a BA from Claremont McKenna College, a J.D. from American University and an LL.M. from Katholieke Universiteit Leuven.