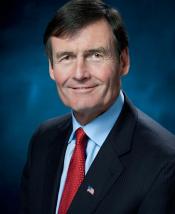 Tom Kuhn is President of the Edison Electric Institute, the association that represents all U.S. investor-owned electric companies. EEI’s members provide electricity for 220 million Americans, operate in all 50 states and the District of Columbia, and directly employ more than 500,000 workers. In addition, EEI has 70 international electric companies as International Members, and 270 industry suppliers and related organizations as Associate Members. Mr. Kuhn joined the Institute in 1985 as executive vice president, was named chief operating officer in 1988, and elected president in 1990.

Prior to joining EEI, Mr. Kuhn was president of the American Nuclear Energy Council, which subsequently merged with the Nuclear Energy Institute. The Council represented virtually all of the companies in the commercial nuclear power industry. He joined the Council in 1975 as vice president, government affairs, and became president in 1983.

From 1972 to 1975, Mr. Kuhn headed the energy section of the investment banking firm, Alex Brown and Sons. Prior to that, from 1970 to 1972, he was White House Liaison Officer to the Secretary of the Navy.

Mr. Kuhn received a BA in Economics in 1968 from Yale University, served as a Naval Officer following his graduation, and received an MBA in 1972 from George Washington University. He completed the Stanford University Graduate School of Business Senior Executive Program in 1989.

Mr. Kuhn served on the Secretary of Energy’s Advisory Board and the Board of the U.S. Chamber of Commerce. He currently serves on the Boards of the Alliance to Save Energy, the United States Energy Association, the Electric Drive Transportation Association, and the American Council for Capital Formation. He is Chairman-Emeritus of the Committee of 100 of the U.S. Chamber of Commerce, Chairman-Emeritus of the American Society of Association Executives (ASAE), and past-chairman of the Alliance to Save Energy, and the ASAE/Key Industry Association Committee.

Mr. Kuhn is Chairman-Emeritus of the National Multiple Sclerosis Society as well as the National Capital Chapter. He currently serves on the Board of the U.S. Navy Memorial Foundation and the Washington Tennis and Education Foundation. From 2006 to 2008, Mr. Kuhn served on the Board of the National Park Foundation. Mr. Kuhn was awarded the Bess Goodman Humanitarian Award in 2000. He served as 1992 and 1997 chairman of the Associations Division, United Way Campaign, and chairman of the 1996 through 1998 National Alliance to End Homelessness Awards dinners.

Mr. Kuhn was chosen as Association Executive of the Year 2000 by Association TRENDS magazine. He was the recipient of The Energy Daily’s 2000 Public Policy Leadership Award. He received the Alliance to Save Energy’s 2004 Chairman’s Award. Mr. Kuhn also received the 2009 ASAE/Center for Association Leadership’s Key Award. He was the recipient of the Fund for American Studies (TFAS) 2014 Congressional Scholarship Award. In September 2015, Mr. Kuhn was honored as the 2015 Trade Association CEO of the Year, presented by CEO Update.  The award recognizes excellence in trade associations and professional societies.  In 2017, Mr. Kuhn received the Energy Good Scout Award from the National Capital Area Council of the Boy Scouts of America.  Mr. Kuhn was awarded the United States Energy Association’s 2018 Energy Award for "unparalleled contribution and leadership in the energy sector, and his support of USEA." He also received the Keystone Policy Center 2019 Leadership Award.