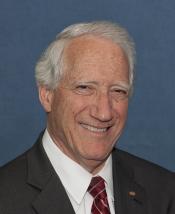 Marv Fertel is president and chief executive officer of the Nuclear Energy Institute (NEI) which is the policy organization for the U.S. nuclear industry and represents the industry in addressing generic technical regulatory issues before the Nuclear Regulatory Commission; as well as policy and legislative activities with the Congress and the Executive Branch.  NEI has about 350 corporate members in 19 countries.

Mr. Fertel has over 45 years of experience working with the electric utility industry on issues related to designing, siting, licensing and managing both fossil and nuclear plants.

He has worked in executive positions with such organizations as Ebasco and Management Analysis Company.  In November 1990, he joined the U.S. Council for Energy Awareness as vice president of Technical Programs. With the formation of NEI in 1994, he became NEI’s vice president of Nuclear Economics and Fuel Supply.

Mr. Fertel was named senior vice president and chief nuclear officer in 2003 and in 2009 he was named President and Chief Executive Officer of NEI.

He is a member of the Board of Directors of the Center for Energy Workforce Development, the United States Energy Association, the Foundation for Nuclear Studies and the National Energy Foundation.