Skip to main content
Innovation is the Driving Force Behind Growth in the Energy Sector, DOE Perry Says 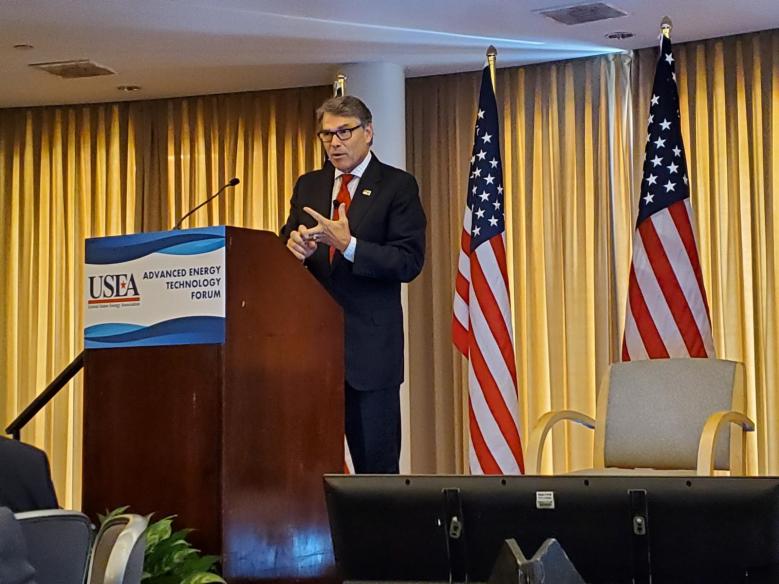 Innovation is the Driving Force Behind Growth in the Energy Sector, DOE Perry Says

Perry praised U.S. universities and national laboratories for developing some of the most promising new technologies to transform the energy industry and the U.S. electric sector.

"As U.S. Energy Secretary, I have a front row seat to the greatest incubators of innovation, our national laboratories. They are spearheading astonishing research on artificial intelligence and they’ve brought us breakthrough technologies that have unleashed multiple energy sources from renewables to fossil fuels and nuclear. Under President Trump’s leadership, we have put innovation, not regulation squarely in the drivers’ seat of our energy policy," Perry said.

Perry’s remarks at USEA come on the heels of President Trump’s remarks at the White House July 8 celebrating American energy innovation and environmental policies that have made U.S. air and water among the cleanest in the world.

Along with panel discussions among high-level leaders from the energy and electricity industry, USEA honored one of the sector’s most transformative leaders--Electric Power Research Institute CEO Mike Howard, PhD, PE--with the U.S. Energy Award.

The award recognizes exemplary commitment and leadership in the energy sector.

USEA Executive Director Barry Worthington said, “We applaud Trump administration policies that support innovation because it is innovation that is making our electric grid more efficient and improving electricity production and delivery. USEA’s mission rests on improving electricity access globally,” said USEA Executive Director Barry Worthington. “The U.S. electric industry, and leaders such as Mike Howard, have been great partners as we try to share best practices in electricity delivery with our allies.”

Worthington said, “Mike Howard has demonstrated strong leadership in guiding EPRI to participate more fully in meeting the challenges of the global electric industry. This award recognizes EPRI’s role in facilitating the use of new technologies to enable more people to have cleaner and affordable electricity.”

In accepting the U.S. Energy Award, Howard said, “I am honored to receive this USEA award in recognition of EPRI’s growing leadership in the global electric industry.”

Howard said, “I am most appreciative of the EPRI scientists and engineers who are actively sharing their talents and expertise with the goal of using technologies to strengthen the electric systems and provide access to electricity to more of the world’s citizens.”