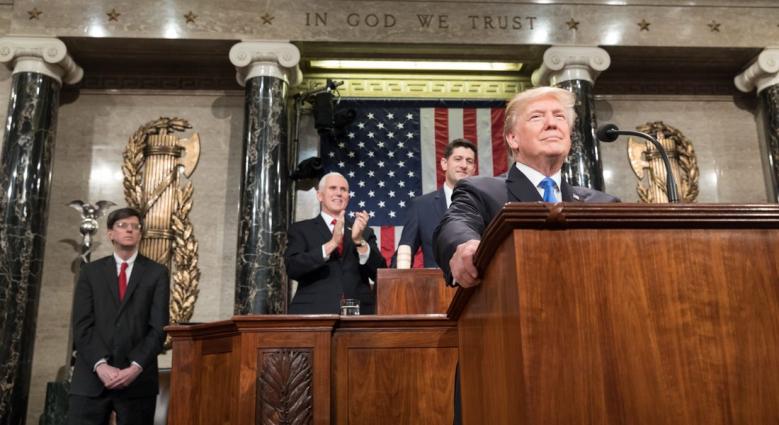 WASHINGTON, D.C. — On Tuesday, in his first State of the Union address, President Trump highlighted American energy security, production, and growth of the sector as a priority for his administration.

“American energy abundance has been a mantra for President Trump in his first year, but it has been more than words.

“President Trump has removed unnecessary obstacles to infrastructure development, lifted the constraints on energy production, and infused a greater sense of certainty in the market, all in his first year.

“The administration started by taking inventory of redundant regulations. That led to regulation rollback and streamlining the infrastructure approval process, from pipelines to transmission lines, which transport essential energy to the citizens of our country.

“Oil and gas production is up 10 percent, and in 2017, the United States became a net exporter of liquefied natural gas (LNG) and a primary supplier to the global market. The U.S. has already shipped supplies to Europe, Asia and South America.

“All of this builds our economy and creates jobs. IHS says for every 1 Bcf/d of shale gas production, about 32,000 total jobs aresupported throughout the U.S. economy.

“President Trump understands how business and markets work, and he understands the link between energy production and national security.

“This refreshing pivot from a world of constraints and uncertainty to one of freedom to explore, produce and even provide the world with energy resources to meet a growing global demand is laudable."

The United States Energy Association (USEA) is the U.S. member of the World Energy Council (WEC), the energy body of the United Nations. USEA also serves as a bipartisan advisory organization that represents 150 members across the U.S. energy sector from the largest Fortune 500 companies to small energy consulting firms. USEA’s team of international energy specialists work with the U.S. federal government to build out energy infrastructure in developing countries.