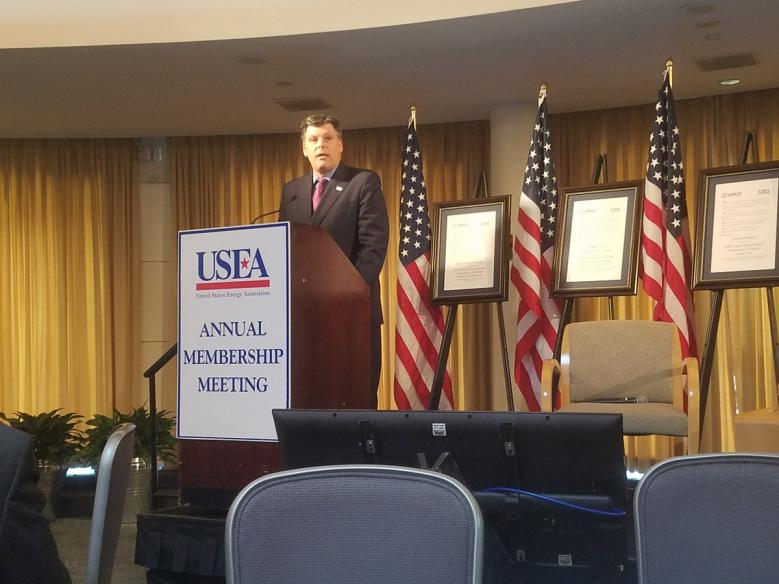 Washington, D.C.— On Thursday, Brock Bierman, the U.S. Agency for International Development’s (USAID) Assistant Administrator for the Bureau of Europe and Eurasia, urged the U.S. and its allies to collectively protect countries in Southeast Europe from renewed threats to their sovereignty by the Kremlin.

In remarks to the U.S. Energy Association’s Annual Meeting and Public Policy Forum, Bierman said the Kremlin has a propensity to exert control over its neighbors using its energy resources.

It sets “below market fuel prices and encourages countries to accumulate debt and become dependent on cheap fuel to extend its political leverage,” Bierman said.

He noted that the Kremlin uses “frozen conflicts in Eastern Ukraine, Moldova and the Republic of Georgia to strand critical energy assets and manipulate regional electricity and natural gas markets for political advantage.”

He emphasized that many of the Eastern Block and former Soviet republics, still recovering from decades of disrepair, must decide what role they want to play in the world.

“Do they want to be free, open, and investment-friendly or corrupted, closed, and suspicious of the global marketplace?” Bierman said. “The decisions they make will have consequences for global security, and their own independence, for at least the next generation. Energy plays an incredibly important role in that decision.”

After the fall of the Berlin wall in the early 1990s, USAID and USEA were partners in helping Poland, Hungary, Czech and Slovak republics rebuild their dilapidated grid. The partnership has lasted 26 years and has morphed into massive regional interconnection projects that encourage former Soviet republics to share resources and work as a region instead of relying on individual country energy resources and infrastructure.

Bierman said USAID and USEA must continue to help the former republics strengthen and grow their energy independence, asserting that, “Energy independence is vital to securing democracy.  Nations should be able to choose where their energy comes from and how much they are willing to pay for it.”

He welcomed the interest, participation, and investment of American companies in this endeavor, stating that, “American businesses offer these countries the chance to take the final steps towards a self-reliant, independent future.”

USEA Senior Director, Will Polen, who works with USAID on projects in Europe and Eurasia said, “When we started working in the region in the 1990s, we were working with vertically-integrated, state-owned utilities that were bankrupt legacies of the Communist era. They were cannibalizing their systems because they hadn’t been able to afford maintenance. So, for probably 15 years before we arrived, the networks were deteriorating.”

Polen said the grid now looks nothing like it had 25 years ago.

“We were able to help cause the physical disconnection of utilities in that region from the Soviet grid and connect those utilities to the European grid to become a stable part of Europe,” Polen said. “Things are different now. We’re using our partnership with USAID to improve and expand the region’s natural gas pipeline network and using modeling to  improve the electric grid to make it more regional instead of country specific. This is really a phenomenal undertaking to overhaul the energy systems of Southeast Europe.”

Bierman said, “The partnership between USAID and USEA exemplifies the generous nature of the American spirit.  American companies and citizens shared their expertise, their time, and their energy to ensure that our partner nations enjoy the same liberties we do.  We should all be proud of our success in this region.”

The USEA Annual Meeting and Policy Forum brings together a distinguished group of speakers and more than 150 energy and international development stakeholders to highlight industry achievements, challenges, opportunities, and policy developments.