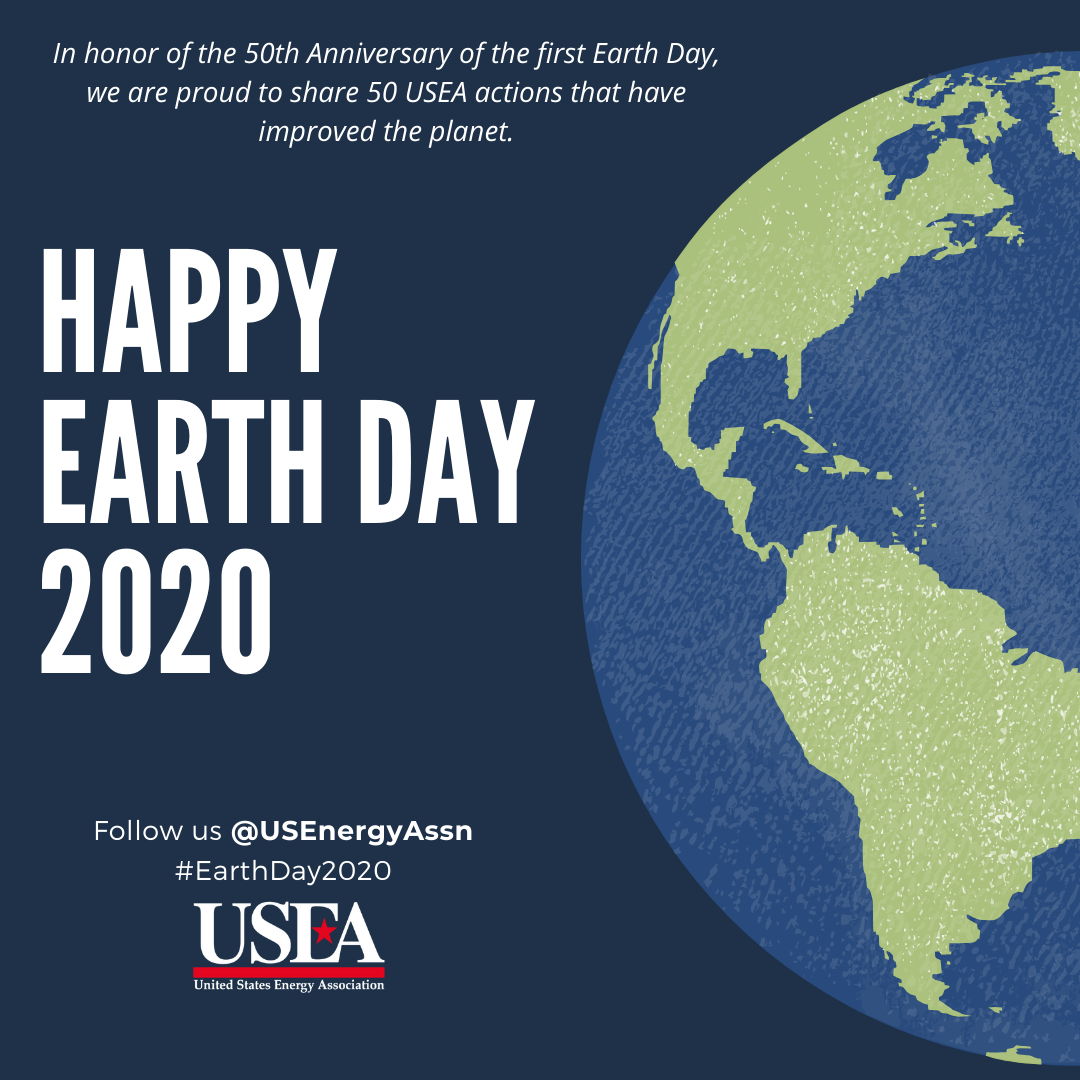 In honor of the 50th Anniversary of the first Earth Day, we are proud to share 50 USEA actions that have improved the planet.

1. Hosted the premier Washington based Energy Efficiency Forum for 29 years with Johnson Controls.

3. Provided recommendations to the UN Framework Convention on Climate Change regarding treatment of Carbon Capture and Storage and Enhanced Oil Recovery relative to the Paris Agreement through the UN Economic Commission for Europe, 2015.

4. Conducted training programs in China regarding environmental protection in oil and gas production.

10. Ensured environmental protection was front and center in the 17th Congress of the World Energy Council, Houston, 1998.

11. Assisted Tanzania in the development of a reverse auction platform for clean energy projects.

18. Assisted India with reaching their goal of 227 GW of installed capacity of renewable energy by 2022 on its power grid.

20. Facilitated training for Afghanistan's DABS utility on the promotion and integration of renewable energy.

23. Lead training for Indonesian utility and ministry representatives on integrating both solar and wind into the grid to increase their clean energy portfolio.

24. Organized Executive Exchange on Reverse Power Auctions in Brazil for Tanzanian delegates to increase their ability to install renewable energy and reach their climate goals.

25. Facilitated the attendance of delegates from Uzbekistan, Pakistan, India, Bangladesh, Thailand, Indonesia, Vietnam, Laos, and Cambodia at the 2017 Asia Clean Energy Forum to present new ideas on achieving clean energy access for all.

26. Lead the Executive Exchange on Developing an Electricity Regulatory Authority for Haiti to Jamaica in order to learn best practices to increase    renewable energy development in Haiti.

29. Facilitated a Workshop on Asset Management and Hydropower O&M for the Uganda Electricity Generation Company on improving their energy efficiency from their hydropower units.

33. Led the inaugural International Partnership for the Hydrogen Economy Ministerial Meeting and supported as the IPHE Secretariat.

37. Enabled investment in hydroelectric generation by strengthening the Republic of Georgia electric grid.

38. Facilitated an executive exchange to the Western U.S. for Armenian energy and environment officials focused on solar and wind power technologies.

40. Helped to determine the maximum amount of renewable energy that could be securely added to the power grids in Armenia, Georgia, Moldova, Ukraine, Romania and Bulgaria.

42. Supported Secretariat to the Asia Pacific Partnership on Clean Development and Climate.

44. Convened of a reverse trade mission to the U.S. for Turkish energy and environmental officials focused on U.S. energy efficiency and energy performance contract best practices.

These actions were taken in partnership with the following U.S. Government Agencies: