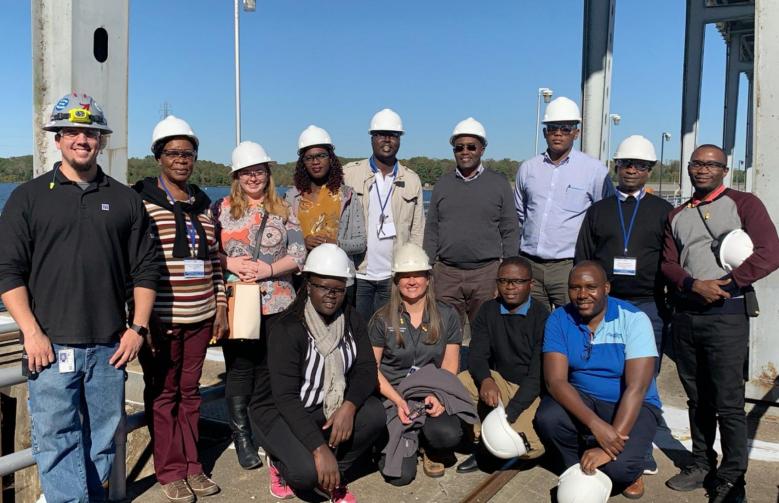 After more than 80 years of building and operating hydroelectric dams, we may be tempted to take for granted TVA’s experience in things like flood control, dam safety and river navigation. But in some parts of the world, challenges we’ve solved still exist for power providers serving their developing nations.

“TVA is well-known in Uganda and has been successful in managing issues that we ourselves are facing—despite our difference in size—which is why we’re here,” said Harrison Mutikanga, CEO of UEGCL.

Those issues relate to aging infrastructure as well as new dams that are currently under construction.

“Our oldest dam was built in 1954, but the rest were constructed in just the past few years,” Mutikanga said. “Our newest dam is only seven months
old.”

During their visit, the UEGCL team visited Watts Bar Dam for an inside look at how TVA keeps the 77 year-old asset running reliably.. They also engaged in technical sessions led by TVA on Dam Safety, Concrete Growth and Asset Management & Maintenance Strategy.

“Watts Bar is an older dam, but very successful,” said Mutikanga. “With greater than 97 percent reliability, we know it as one of the best in the world. We want to learn what you’re doing to get the most value from your assets so that we can do the same.”

Another highlight for the visitors was a trip to TVA’s Hydro Dispatch Control Center, located inside the Chattanooga Systems Operation Center (SOC).

“The automation is very impressive,” said Proscovia Njuki, chair of UEGC’s board of directors. “To be able to operate and monitor all of your dams from one central location… that’s something we want to pursue.”

With the new dams that UEGC has been adding in recent years, and with guidance from larger utilities like TVA, the utility hopes to be able to move in that direction in the not-so-distant future.

The company also hopes to soon begin diversifying their portfolio with solar power, tapping into Uganda’s sunny climate and location at the Equator.

“TVA has a very good energy mix. Mutikanga said. “We will definitely be back to learn more.”

“Trips like these are so helpful in positioning smaller energy providers for successful growth,” said Elise Voorhis, senior program coordinator of the Energy Utility Partnership Program at the United States Energy Association and organizer of the visit to TVA.

“When we talk about TVA’s mission of service, we’re usually thinking about the 10 million people we serve across the Tennessee Valley,” she said. “We forget that it’s much broader than that — people around the world are learning and benefitting from what we’re accomplishing. It’s a great honor to meet and work with those improving lives in other nations.”