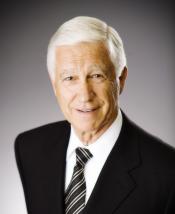 Bob Mitchell serves as CEO of Atlantic Wind Connection (AWC), LLC, the visionary and transformative subsea transmission backbone that will enable large-scale development of the Mid-Atlantic region’s vast offshore wind energy potential. The AWC will enable 7,000 mw of offshore wind to be delivered to New Jersey, Delaware, Maryland and Virginia. Mr. Mitchell continues serving as CEO of Trans-Elect, America’s first independent transmission company that he pioneered with its formation in 1999. Trans-Elect became the lead developer of the AWC in 2009.

The Atlantic Wind Connection project was publicly launched in October, 2010, with a front page story in the New York Times and followed by stories in every major news outlet in North America, Europe and Asia. The attention was prompted by the innovation and scale of the $5+ B, ten year project funded by Google, Bregal Energy formerly Good Energy and Marubeni. The Belgian transmission company, Elia, rounded out the equity investors in August of 2011.

The Atlantic Wind Connection project is well underway in designing the project, securing regulatory and permitting approvals and is on track to serve the wind developers in Mid-Atlantic region with a super highway for offshore wind that will benefit the environment and rate payers well beyond just the Mid-Atlantic States.

The progress being made on the AWC follows a track record of Trans-Elect achieving history making successes with the first ever acquisition of transmission systems from two utilities and operating 12,600 miles of transmission assets. Mr. Mitchell also led Trans-Elect’s team in the development and financing of the Path 15 transmission line. The successful completion of Path 15 in two years solved a major transmission congestion chokepoint in California that contributed to rolling blackouts in the Bay area in 2000 and 2001. The development of this line was a first in public/private partnerships with the U.S. Department of Energy, Pacific Gas and Electric (PG&E) and independent, Trans-Elect. Project Finance International magazine awarded Trans-Elect and Path 15 the “Infrastructure Deal of the Year for the Americas.”

Mr. Mitchell comes to the electric industry with a diverse background in business and high-level positions in the executive and legislative branch of state and federal governments. Most notably, he served as Chief of Staff to a US Senator, was a Presidential appointee to the US Department of Agriculture and served in the Governor’s cabinet in Michigan.

Mr. Mitchell has also formed and run business ventures in real estate, finance and energy. Mr. Mitchell has served on the boards of the California Foundation for the Economy, Environment, Ocean Renewable Power Company, Counsel of Environmental Quality and many others. He initiated and founded the bi-partisan Political Leadership Program at Michigan State University in 1992 that has trained nearly a thousand people to serve more effectively in public office.

Trans-Elect, headquartered in Bethesda, MD, was named EnergyBiz magazine’s “Energy Company of the Year” in 2011.