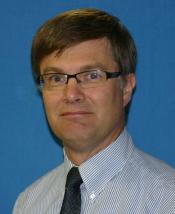 Ian Yeates has worked at SaskPower since 2000, largely in the areas of strategic planning and rate regulation. In 2013 he assumed his current role as Director, Supply Development Carbon Capture. Prior to this, he was SaskPower’s General Manager, Corporate Planning and Rate Design.

Ian’s work with strategic planning has closely involved him with developments in the industry on a wide number of areas. In particular, the development of a generation plan, along with fuel supply initiatives has been critical to SaskPower’s future.

Ian has been involved with the development of Saskatchewan’s rate regulatory process from its inception, in its current form, over the past decade.  The system is unique to Saskatchewan, with the Saskatchewan Rate Review Panel serving as an advisory body to Cabinet.  Ian has managed the utility’s portion of the process in terms of preparing the rate applications and working collaboratively with the Panel in setting up public meetings to present the details of the application, as well as working with the Panel’s consultants.  The current process was largely his creation in concert with the Panel members.

Prior to his appointment at SaskPower, Ian worked at Crown Investments Corporation, the holding company for Saskatchewan’s Crown corporations sector from 1997 to 2000.  Immediately prior to that, he worked as the City of Waterloo’s budget manager in Ontario, for approximately eighteen months from 1996 – 1997.  Ian’s first career was with the Royal Canadian Navy, where he served as a Supply Officer, responsible for all financial and logistical matters at various levels and roles from 1979 to 1996.

Ian holds an honours degree in history from the Royal Military College in Kingston (1979), as well as an MBA from Queen’s University (1993), also in Kingston.   He is presently working on his MA in history for fun.  Ian is married, has three grown children and two step-children and lives in Regina, Saskatchewan.