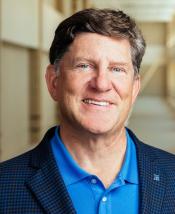 Jeff Lyash is as comfortable talking with a crew in a plant as he is in the boardroom. His exceptional people skills and technical experience make him one of the top leaders in the energy industry. Appointed president and chief executive officer of the Tennessee Valley Authority by the Board of Directors in February 2019, Lyash leads the nation’s largest public utility and one of the top producers of electricity in its mission of serving the people of the Tennessee Valley.

Under his vision and leadership, TVA has significantly lowered operating and maintenance costs, improving both productivity and efficiency. These savings are passed on to customers in terms of lower energy costs – 70 percent of the nation pays more for energy than those served by TVA. In 2019, he announced a 10-year financial plan proposing a decade of stable rates – making TVA and the Valley even more competitive.

He introduced a long-term partnership proposal with our Local Power Companies that allows us to fully leverage the capability of the Tennessee Valley Public Power model. In less than a year, more than 90 percent of the 153 local power companies that TVA serves have signed onto the partnership. The partnership allows for better long-range planning and closely aligns the interests and objectives of TVA and our customers.

With significant public and stakeholder input, a new Integrated Resource Plan was approved that serves as a guide as TVA provides clean, reliable and low-cost energy for the next 20 years.

Lyash has shown tremendous leadership in providing support and assistance to the customers and communities impacted during the pandemic. This includes providing $1 billion of credit support to Local Power Companies; a $4 million Community Care Fund; and Back-to-Business incentives for local businesses. In addition, in August 2020 the TVA Board approved a $200 million Pandemic Relief Credit — a 2.5 percent reduction — for customers during Fiscal Year 2021.

Before coming to TVA, Lyash served as president and CEO of Ontario Power Generation Inc., one of the largest electric generating companies in Canada with a diverse fleet of nuclear, hydroelectric, gas, biomass and renewable generating stations.

Lyash was formerly the president of CB&I Power where he was responsible for a full range of engineering, procurement and construction of multi-billion-dollar electric generation projects in both domestic and international markets. He also provided operating plant services for nuclear, coal, gas, oil and renewable generation.

Before the merger of Progress Energy and Duke Energy, Lyash was executive vice president of Energy Supply for Progress Energy. In this role, he oversaw Progress Energy's diverse 22,000-megawatt fleet of generating resources including nuclear, coal, oil, natural gas and hydroelectric stations. In addition, Lyash was responsible for generating fleet fuel procurement and power trading operations.

Lyash began his career in the utility industry in 1981 and worked for the U.S. Nuclear Regulatory Commission in senior technical and management positions throughout the Northeast and in Washington, D.C.  He received the NRC Meritorious Service Award in 1987.

Lyash earned a bachelor's degree in mechanical engineering from Drexel University, and was honored with the Drexel University Distinguished Alumnus Award in 2009. He has held a senior reactor operator license from the Nuclear Regulatory Commission and is a graduate of the U.S. Office of Personnel Management Executive Training Program and the Duke Fuqua School of Business Advanced Management Program.

Lyash is an avid golfer and fly fisher. He and his wife, Tracy, enjoy cooking, skiing, reading and charitable work – and spending time with their two married children and nine grandchildren. The Lyashes live in Knoxville, Tennessee.