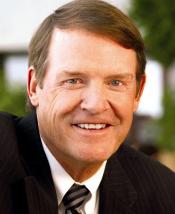 Michael G. Morris, Chairman and Chief Executive Officer of American Electric Power Company is the 2011 recipient of the United States Energy Award, an honor given annually to an outstanding energy leader in recognition of their leadership initiatives and contributions to the global understanding of energy issues.

Morris has led AEP since January 1, 2004 and has guided the company’s efforts to advance an interstate high-voltage transmission system in the United States; develop innovative carbon capture and storage systems for coal-fueled power plants; and put in place energy efficiency initiatives and intelligent distribution grid technologies.

Prior to joining AEP, he was chairman, president and CEO of Northeast Utilities System and was heavily involved in the formation of ISO-New England, as well as restructuring and retail customer choice in the New England states.  Morris also was CEO and President of Consumers Energy and president of CMS Marketing, Services and Trading. Additionally, he was president of Colorado Interstate Gas Co. and executive vice president of marketing, transportation and gas supply for ANR Pipeline Co., both subsidiaries of El Paso Energy. Morris was the founder and president of ANR Gathering Co., one of the first gas marketing companies in the United States.

Morris is past chairman of the Edison Electric Institute and the Institute of Nuclear Power Operations. He also serves on the U.S. Department of Energy’s Electricity Advisory Board, the National Governors Association’s Task Force on Electricity Infrastructure, and the Business Roundtable (chairing the Business Roundtable's Sustainable Growth Initiative). He serves as a director of the boards of Alcoa, Battelle, and The Hartford Financial Services Group, Inc, and was recently appointed to the Eastern Michigan University Board of Regents and the MSU College of Law Board of Trustees.

Morris joins a prestigious list of individuals who have committed their time to building the respect of the industry through corporate and public leadership. He has greatly supported the work of the United States Energy Association and the World Energy Council and is recognized internationally as a prominent global energy leader.