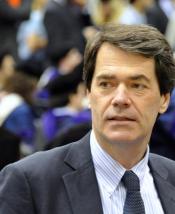 Pierre is co-founder and Managing Partner of Bernard EnergyAdvocacy (BEA), a boutique advisory firm (14 consultants) created in 2011 that specializes in advocacy, strategic business development and dedicated legal advice, all relating exclusively to electricity transmission and distribution, renewables, power storage and energy efficiency.  The firm provides advice to international key players in the electricity markets mainly in Europe, the U.S. and the Gulf countries (ME).

Pierre actively participated in the drafting of many parts of European and Belgian energy legislation/regulation, including grid codes, power exchanges regulation, etc. He also drafted the major grid contracts in Belgium.

He serves on various boards and advisory committees, including the Board of the European Friends of the Supergrid (FOSG). He is a Trustee of Guberna, the Belgian Corporate Governance Centre.  Pierre has law degrees from the Universities of Brussels and Ottawa. He attended executive education programmes at Cambridge (UK) and Harvard (USA). Pierre has authored and is coordinating editor of a major reference book in the electricity sector: “EU Electricity Laws”, an almost 3.000p overview of the key European legislations regarding the electricity sector.