Souki Praised By Peers As An Unrelenting, Pioneering Entrepneur

Washington, D.C. - Charif Souki, Co-founder and Chairman of Tellurian Inc., accepted the 2020-2021 United States Energy Award last week at the National Press Club in recognition of his outstanding lifetime efforts to advance energy initiatives and for his support of USEA.

The award, which was established in 1989 to recognize preeminent energy leaders and their contribution to the understanding of energy issues, was presented in front of both an in-person audience and an audience viewing via livestream.

Mr. Souki is widely acknowledged as the architect of the liquefied natural gas (LNG) export industry in the United States. He founded Cheniere Energy in 1996, which became the first entity to begin exporting LNG from the U.S. following the shale revolution. He co-founded Tellurian Inc. in February 2016, which is developing an integrated global gas business beginning with LNG export facilities in Lake Charles, Louisiana. 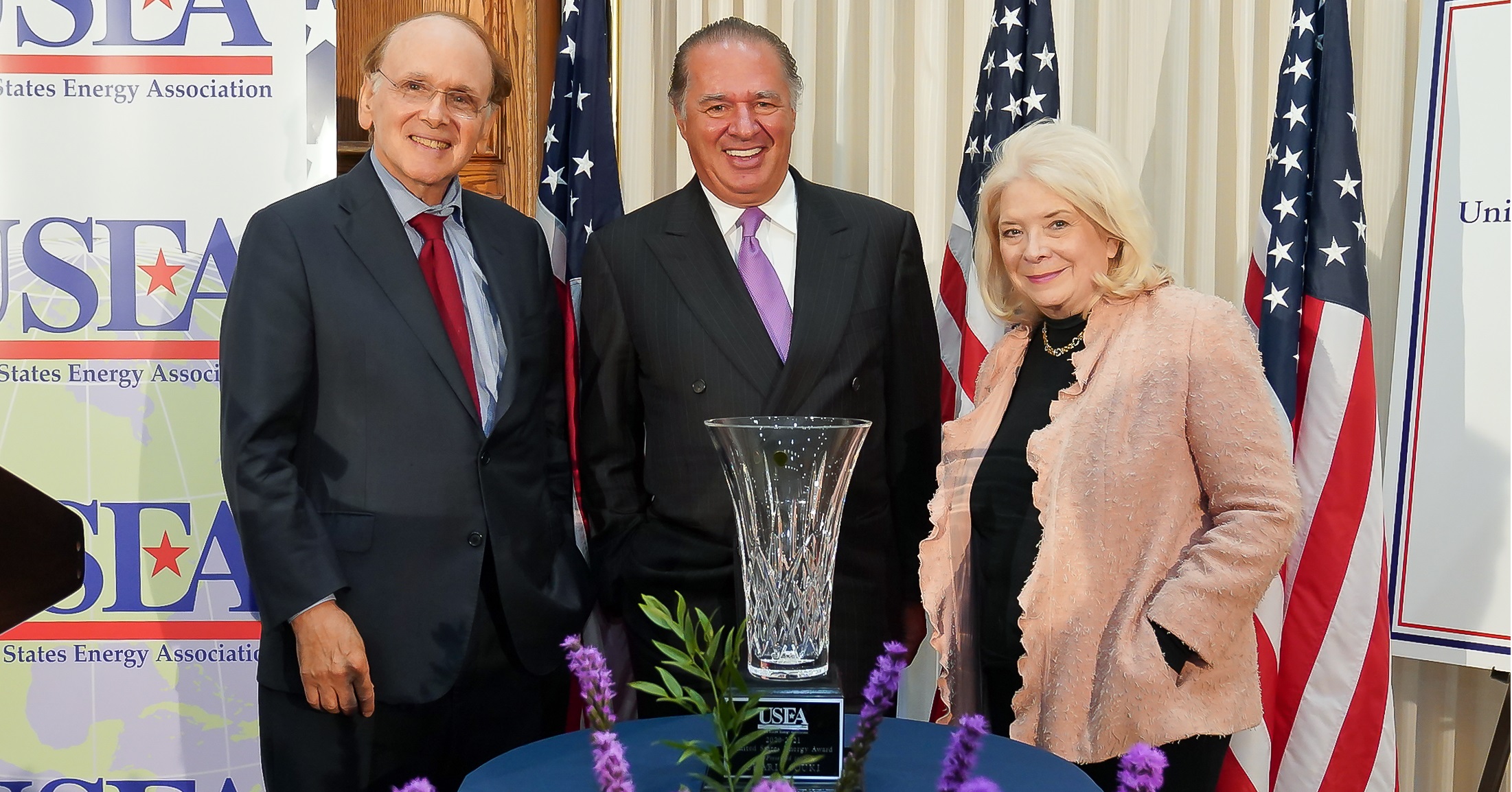 “My career has been defined by two principles, really,” Mr. Souki said after accepting the award.

“Necessity is the mother of invention...you have to adapt. And you can do that if you have the second very important component: having people who were friends - supporters - allowing me to have the confidence in what I was doing.”

Mr. Souki then acknowledged Barry Worthington, who was the Executive Director of USEA for 31 years before passing away in August 2020.

“I would start with Barry Worthington, who recruited me for USEA at a time when we were a very small company. But he saw something: he said ‘you belong here, join us, and be here’. And [to be a part of] an organization like USEA, that allowed me to have credibility in the business.”

Before accepting the award, which was presented by Mrs. Hollis, Mr. Souki was introduced by two longtime friends: Dan Yergin, USEA Board Member, Vice Chairman of IHS Markit, and Pulitzer-prize winning author; and Jack Futcher, former Chairman of USEA and current Vice Chairman of Bechtel Group, Inc. Both men spoke extensively about the incredible entrepreneurial perseverance and dedication it took for Souki to make his vision a reality.

“Charif, being an entrepreneur, saw the need to export LNG. There were  lots of ups and downs, and downs and ups. But Charif stayed the course. He was all in, with entrepreneurial energy, persuasiveness, and perseverance, and the confidence that comes from the optimism of an entrepreneur,” Yergin said.

Yergin also emphasized that in his recent book, The New Map, he calculated the massive economic impact of the LNG export industry that Mr. Souki pioneered: the U.S. saves an astounding $400 billion per year by not importing oil or natural gas.

Dan Yergin and Jack Futcher speak at the ceremony.

Before introducing Mr. Souki to the stage, Futcher said: “It took extraordinary skill for Charif to navigate the regulatory and permitting requirements at both the federal and the state level. At the same time he was doing that, raising the financing required for a major investment was an incredible feat - a real accomplishment. He was able to pave the path, and set the course, for many individuals and companies that followed him. He laid the groundwork.”

At the end of his remarks, Mr. Souki remarked on the future of the global energy landscape and thanked those who have supported him over the years.

“I’m afraid we’re going to have to find a new word for the energy transition - it is more like an energy evolution,” he said. “What is going to happen as the 6 billion people in the rest of the world are trying to live like us?”

“I really appreciate the help of USEA for many years, not just now - when I was a much smaller company - and the help of all the friends and people who believed in me who have made me able to achieve what I’ve done. Thank you very much, and thank you for your recognition.”

Read Ken Silverstein's article on Charif Souki in Forbes here. All photos copyright 2021 Tony Powell. View the ceremony in its entirety below.