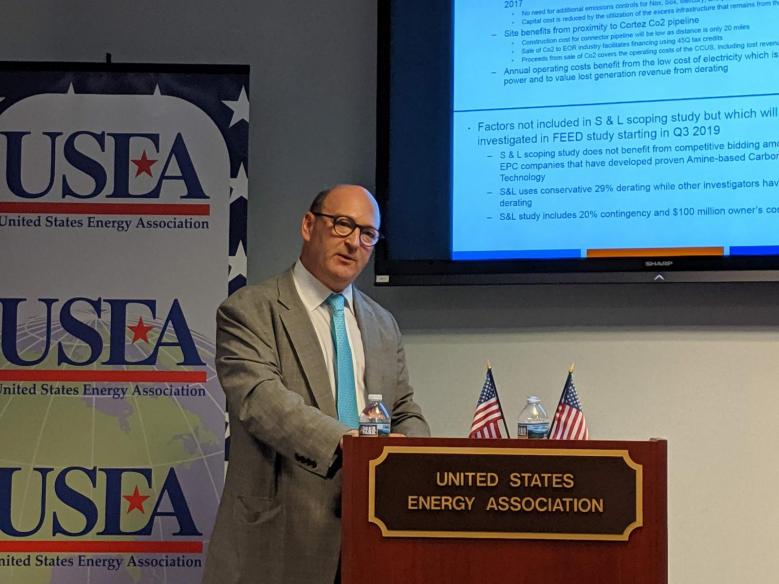 In his presentation, Selch said the San Juan plant would capture 90% of the carbon emissions it produces--6 million metric tons annually--and is projected to become the lowest CO2 emitting fossil-fueled power plant in the Western U.S.

While the power station boasts low SOX, NOX, and mercury emissions, it does suffer from significantly higher CO2 emissions. It’s why the plant was scheduled to shutdown in 2022, a shutdown only averted when Selch and Enchant Energy proposed the CCS retrofits to power plant.

The San Juan power station is close to the Kinder Morgan Cortez CO2 Pipeline, only about 20 miles away. This proximity to the pipeline means that San Juan is poised to be one of the best sites for carbon capture in North America.

Selch estimates that the 45Q tax credits from retrofitting the power station will total about $2.5 billion and will completely pay for the initial $1.2 capital cost of retrofitting with CCS technologies. In addition to tax credits, Selch predicts that the sale of CO2 for enhanced oil recovery via the Cortez pipeline will completely cover operating costs of the CCS facilities.

The Farmington Daily Times said in a story June 27, after the USEA briefing, that while the 45Q tax credits exist, the U.S. Treasury Department and the IRS have not yet developed the regulations for those tax credits.

Once these retrofits are completed, the plant will be able to sell power to California, which had been one of the plant’s largest buyers before the state passed regulation banning power from sources emit more than 1100 lbs of CO2 per megawatt hour.

The retrofits to the San Juan plant are expected by mid-2023.

The San Juan Generating Station supports 478 direct jobs and more than 1000 indirect jobs which support the local economy in Farmington with tax revenue.