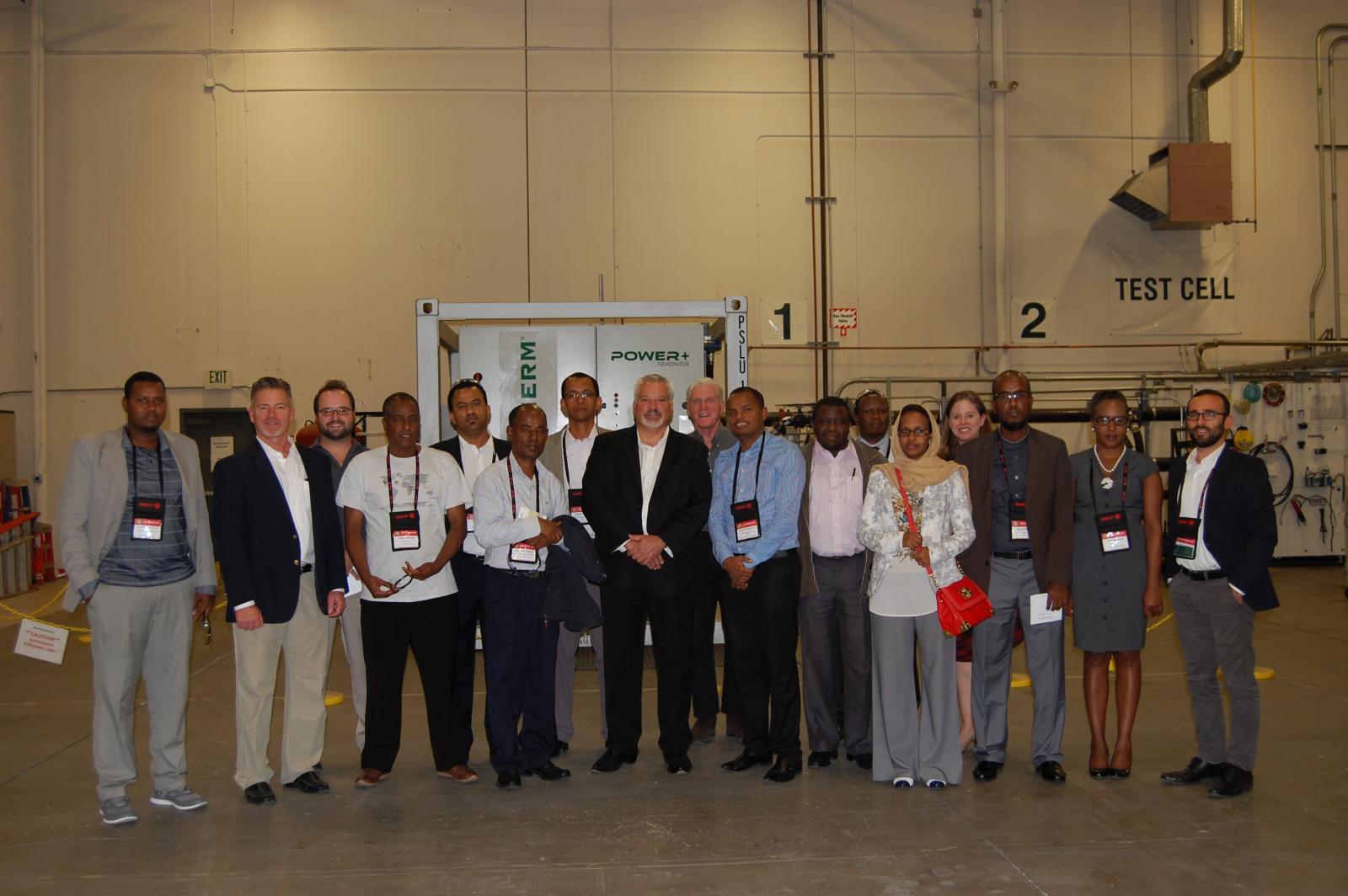 SEPTEMBER 2015 – Reno, NV – 10 senior-level officials from Djibouti, Ethiopia, and Kenya participated in the EAGP Executive Exchange, September 18–27, 2015.  The delegation traveled to Reno, Nevada and Austin, Nevada to meet with private geothermal developers, equipment manufacturers, and geothermal service providers.  This transaction-focused exchange aimed to spur interest among private companies to invest in East Africa’s rich and abundant geothermal resources by fostering a greater understanding of the opportunities in the region.  Delegate presentations articulated data from identified geothermal resources as well as the legal, policy, regulatory and financial market conditions specific to each of the three countries represented.

This program was co-organized by the interagency USG partners of the Power Africa Initiative and the U.S.-East Africa Geothermal Partnership (EAGP).

ABOUT THE EAGP Executive Exchange

The exchange served as a way to showcase opportunities for US geothermal developers in East Africa as well as help identify market niches for geothermal value chain suppliers. The delegation was led by the US-East Africa Geothermal Partnership Team and comprised of representatives from three countries in East Africa (Djibouti, Ethiopia, and Kenya).

Representatives from each country in the delegation were given the opportunity to articulate existing and planned incentives for investment. In addition, delegates presented on current and upcoming geothermal projects in their country.  With both Ethiopia and Djibouti on track to begin drilling for new geothermal prospects, the exchange provided representatives with the chance to connect with companies that could provide advisory services as well as all ancillary services associated with drilling.  Since both Ethiopia and Djibouti are new to geothermal development, it is imperative that they hire industry leaders for their projects to ensure success and to pave the way for future development.  By setting up targeted one-on-one meetings with geothermal developers for representatives in each country, EAGP ensured that delegates were meeting with qualified US companies that are interested in becoming involved in geothermal projects in East Africa.

The final major objective of this exchange was to expose US companies to the new legal frameworks that are currently under development in East Africa, which are creating an enabling environment for private sector involvement.  The current development of a geothermal law in Ethiopia, the Joint Development Agreement being established for GDC in Kenya, and the implementation of an IPP law in Djibouti will all help to advance the investment of US companies in geothermal projects in these countries.  EAGP and Power Africa have been actively involved in the development of both the geothermal law for Ethiopia and the JDA in Kenya, so this was an excellent opportunity to showcase both of these projects.

This year’s GRC Annual Meeting and GEA Geothermal Energy Expo were held in Reno, Nevada and convened over 1,000 geothermal professionals from more than 20 different countries.

The GRC Annual Meeting is the largest geothermal event in North America, providing an international forum where members, participants and guests learn about the latest advances in geothermal technologies through technical and poster sessions.

The concurrent GEA Geothermal Energy Expo offers the opportunity to learn about the latest in geothermal equipment and services while making important business contacts. Every year, the Expo hosts the world's largest gathering of vendors providing support for geothermal resource exploration, characterization, development, production and management. It provides a unique opportunity for exhibitors to showcase their projects, equipment, services, and state of the art technology to the geothermal community.  This year’s GEA Expo featured over 100 different exhibits, including the EAGP Booth, which showcased geothermal opportunities in the delegate countries and various EAGP tools to assist in these developments.  The booth also served as a designated space for one-on-one meetings between delegates, private companies and Power Africa representatives.

In addition to participating in the technical sessions and trade show floor, the exchange delegates attended the 8th International Luncheon, organized by the GRC and U.S. State Department.  One delegate, Dr. Kayad Moussa Ahmed, spoke at the International Session during the conference, with a focus on geothermal power and investment opportunities in Djibouti.

In addition to interacting with private geothermal industry representatives through the GRC Annual Meeting and the GEA Geothermal Energy Expo, exchange organizers arranged meetings with several industry leaders for members of the delegation over the course of 7 days.  The Executive Exchange engaged companies with various capabilities, ranging from early stage exploration, well drilling, and plant design services companies, to private developers and software developing firms

These meetings included group presentations from private companies, as well as one-on-one meetings with delegates from one specific organization. Individual meetings focused on specific project opportunities and areas of potential collaboration or investment between the delegate institutions and private companies.

The exchange delegation met with the following entities:

While attending the GRC Annual Meeting and GEA Geothermal Energy Expo, the delegation traveled to the offices of ElectraTherm, also in Reno, Nevada, to participate in an informative site visit.   ElectraTherm’s CEO, John Fox, presented on the company’s capabilities in designing and manufacturing modular well-head generation units, and demonstrated the Power+ Generator units and associated equipment with other ElectraTherm staff.  The modular Power+ Generator units can be used to generate power using relatively low temperature geothermal resources, found in some of the countries represented in the exchange delegation. ElectraTherm’s Power+ Generators can be also be used in conjunction with the direct use of geothermal heat for applications including space heating for greenhouses, milk pasteurization, meat processing, vegetable drying and other commercial uses.

Following the conclusion of the GRC Annual Meeting and GEA Geothermal Energy Expo, the delagation went on a GRC-sponsored two-day field trip to Austin, Nevada. Participants were able to visit and tour the Salt Wells Geothermal Power Plant, owned by Enel Green Power North America and the McGinness Hills Geothermal Power Plan, owned by Ormat Technologies.  The field trip allowed delegates to tour existing geothermal power plants using various technologies, and to interact directly with company representatives, as both Enel and Ormat have shown interest in expanding their operations in East Africa. As Djibouti and Ethiopia are both in early stages of geothermal development, representatives from these countries benefited from visiting working power plants to see different technologies utilized for different resource types.  The resource at Ormat’s McGinness Hills location is a blind geothermal system, which most East African geothermal professionals do not have considerable experience with, but will need to learn about in order to fully take advantage of the potential of the geothermal resources located around the East African Rift.

An Ormat subsidiary (OrPower 4 Inc.) developed the Olkaria III power plant in Kenya, and recently signed an amended Power Purchase Agreement (“PPA”) with Kenya Power and Lighting Company Limited (KPLC) to expand the capacity of the complex by 24 MW.  This expansion would bring Olkaria III’s total capacity to 134 MW.  According to Ormat CEO, Isaac Angel, the fourth plant is expected to come on line in the second half of 2016 and to sell electricity under a 20 years PPA with KPLC. (Source: Ormat Press Release, December 4, 2014)

The EAGP Executive Exchange generated the following measured results.  We anticipate that more business related outcomes of this program will materialize and be made public in the coming months.  Currently, Power Africa and EAGP representatives are working to assist in the “next steps” for business opportunities identified during the exchange between private and public sector stakeholders.

Over the course of the Executive Exchange agenda, 10 senior level delegates from East Africa met one-on-one with the following:

As part of the Executive Exchange, EAGP technical advisors assisted delegates to prepare promotional materials showcasing investment opportunities and informative presentations.  The following materials were distributed during and following the exchange events:

Presented at the EAGP Public Briefing

On June 30, 2013 in Cape Town, South Africa, President Obama announced Power Africa — an initiative to double the number of people with access to power in Sub-Saharan Africa. Power Africa will achieve this goal by unlocking the substantial wind, solar, hydropower, natural gas, and geothermal resources in the region to enhance energy security, decrease poverty, and advance economic growth.

For more on Power Africa, please visit the website: http://www.usaid.gov/powerafrica

ABOUT THE US-EAST AFRICA GEOTHERMAL PARTNERSHIP

The U.S.-East Africa Geothermal Partnership (EAGP) was established in September 2012 to promote the development of geothermal energy resources and projects in East Africa. It also encourages and facilitates the involvement of the U.S. geothermal industry in the region. The EAGP program is a partnership between the U.S. Agency for International Development (USAID) and the Geothermal Energy Association (GEA), and is implemented by the U.S. Energy Association (USEA).  EAGP focuses on six priority countries: Djibouti, Ethiopia, Kenya, Rwanda, Tanzania, and Uganda.

Through the EAGP program, the United States Energy Association (USEA) is providing technical and transaction advisory support and capacity building to public organizations and government ministries involved in geothermal development in the region through executive exchanges, workshops and short-term technical assistance assignments to learn about geothermal best practices from their counterparts in the U.S. and third countries.