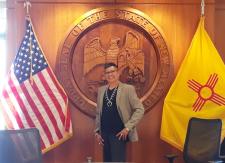 Dr. Dave Goldtooth is of the Red House Clan, born for Salt People Clan, Maternal Clan is Near the Water People Clan, and Paternal Clan is Big Leaf Clan. He resides at Round Rock, AZ on the Dine’ Nation. His parents are Henry Goldtooth and Mae Allen-Goldtooth. His siblings are Brenda Allen, Cherlyn Goldtooth, and Marlana Goldtooth. His nieces and nephews make up his world of laughter and humility. His late maternal grandmother was Louise Allen Brown Begay who attributed to many of his successes and accomplishments.

He enjoys living on the Dine’ Nation where he appreciates his Dine’ culture, language, and heritage. His education continues to be an outlet to learn and grow developmentally about the mainstream society, globally and internationally, through literature, world-wide-web, and the like.

He thrives on past and current learning and teaching by appreciating and respecting diversity through various topics that pertain heavily on his people, all nations. His experiential background stems from being a former math teacher, counselor, principal, and recently, as the Interim Superintendent of Central Consolidated School, Shiprock, New Mexico.

He speaks the Dine’ language and is an advocate for his people in the best way that he can be.