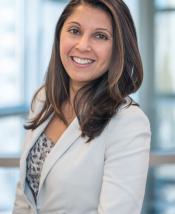 Dipka has a deep understanding of energy, the media, national political and geopolitical developments, and how those factors impact the energy sector. For nearly two decades, Dipka covered energy as a journalist in D.C. then worked with PR agencies to brand and advise energy clients on their public and government affairs strategy. From 2013 until 2015, Dipka built and managed the public and government affairs practice of a Texas independent oil and gas driller.

In 2015, she launched Conduit Strategies, a boutique consulting firm in New York, where she advised small businesses on their communications strategy.
She has worked closely with executives across industries, and with PR professionals, to prepare them for interaction with the media and others. Her team at Conduit coached individual executives for speaking engagements for various events and audiences.

Prior History
Dipka is an award-winning journalist with more than a decade of journalism experience, working in all mediums of the communications field. She has written for The Washington Post, The Washington Times, the Associated Press, the former Knight Ridder newspaper chain, McGraw-Hill Platts, and she has worked as a broadcast producer and reporter for Clean Skies News and ABC7 in Washington, DC. She is currently invited to  contribute to The New York Times, PRWeek magazine, and The Daily Caller.

An active member of a number of media and energy groups, Dipka was a member of the White House advance team for the 2012 Democratic National Convention, where she was a special adviser to speakers, and has been a regular guest lecturer for the National Journalism Center as a Hatton W. Sumner Research Fellow.
As a member of the National Press Club’s Board of Governors, she served as chairman of the Events Committee, presidential advisor on the Speakers Committee, and in 2006, she became the Washington Press Corps liaison to the Embassy of India.

Dipka is a certified language specialist for the American Council on the Teaching of Foreign Languages and the U.S. Department of Defense Language Institute.
Dipka graduated from the University of South Carolina with a bachelor's degree in journalism and a minor in Spanish with a certificate of Spanish literature, culture and history from the University of Santiago de Compostela in Santiago, Spain. She also earned a graduate certificate from the Massachusetts Institute of Technology in carbon capture and sequestration.