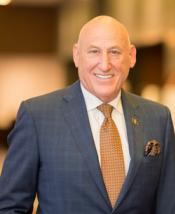 Donald R. Hoffman has a Bachelor of Science degree in Nuclear Engineering and Science.  He served in the US Nuclear Submarine Navy as a Senior Reactor Operator and Engineering Officer from 1970 – 1979.  He was the Manager in the Nuclear Regulatory Commission’s Licensing and Technical Specifications Department reviewing License Applications and Technical Specifications for more plants in the US licensing post TMI from 1980 – 1985.

Donald founded EXCEL Services Corporation (EXCEL) in 1985 to provide specialized professional services to nuclear utilities and regulatory authorities in the areas of licensing and regulatory support. In the thirty-one years since the formation of the company, EXCEL has become globally recognized as the premier supplier of licensing, regulatory, engineering, technical, operations and critical infrastructure services.

Donald is a Past President of the American Nuclear Society (ANS) and a past member of the ANS’s Board of Directors.  At ANS, he held every major leadership office and was chair of many of the organization’s committees.  He also served as a former member of the Secretary of Commerce’s Civil Nuclear Trade Advisory Committee and has been appointed again for the 2017 – 2018 term.  He has also held senior advisory positons in the International Atomic Energy Agency (IAEA), the Western European Nuclear Regulators Association (WENRA), and the World Nuclear Association.

He is the current President of Eagle Alliance, a US grassroots organization that represents all facets of Nuclear Science and Technology.  He is on the Board of Directors of the European Nuclear Society; serves on numerous IAEA Committees and Task Forces for New Nuclear Build and Current Nuclear Fleet Safety and Operational Issues; is the Vice Chair of the World Nuclear Association Cooperation in Reactor Design, Evaluation and Licensing (CORDEL) Group; is Chair of the Virginia Nuclear Energy Consortium Authority (VNECA) working with the Governor of Virginia to promote Virginia as a premiere nuclear state; and was the founding Co-Chair of the ANS’s Special Committee on Nuclear in the States, and is now the President/CEO of Sensible Energy Matters to America (SEMA), an organization he founded to ensure the state and federal lawmakers appropriately value nuclear in the present and future energy mix and develop a sensible approach for the overall energy policy.

Additionally, he serves as:

Member, Board of Directors US Nuclear Infrastructure Council (NIC) (2015-Present)

Member, Board of Directors US Energy Association (USEA) (2015-Present)

Hoffman is also deeply involved in a number of charitable activities. He is on the board of directors of the Montgomery County Animal Welfare Society, the Muscular Dystrophy Association, the Multiple Sclerosis Society, the American Cancer Society, the Maryland Special Olympics, the Kidney Foundation, the Washington Redskins Charitable Foundation, Wounded Warriors, Fisher House, Hero Dogs, and others.