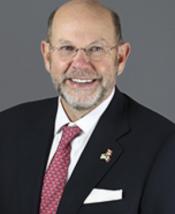 \James B. Robb assumed the role of president and chief executive officer of NERC in April 2018.

From 2014 to 2018, Mr. Robb served as president and CEO of the Western Electricity Coordinating Council (WECC) where he was responsible for the strategic direction and leadership of all of WECC’s activities.

Mr. Robb has more than 30 years of experience in the energy sector as an engineer, a consultant, and a senior executive. Prior to becoming WECC’s CEO in 2014, he held three major leadership roles in the industry at Northeast Utilities (now Eversource Energy) as senior vice president of Enterprise Planning and Development; at Reliant Energy (now part of NRG Energy) where he served as senior vice president of Retail Marketing for the competitive retail business in Texas and the Northeast; and at McKinsey & Company where he was a partner and the leader of the West Coast’s Energy and Natural Resource Practice. During his 15-year career at McKinsey, he worked closely with prominent electric power companies in California, western Canada, the Pacific Northwest, and the Rocky Mountain states, as well as with some of the region’s largest energy consumers.

Mr. Robb earned a bachelor’s degree in Chemical Engineering from Purdue University in Indiana and a master’s degree in Business Administration from the Wharton School of Business at the University of Pennsylvania, Philadelphia, PA.