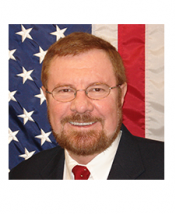 Ken Nemeth has served as the Southern States Energy Board’s Secretary and Executive Director since February 1975.  He is responsible for the direction, formulation, development, demonstration, and implementation of all Board programs. This includes his service as Principal Investigator for the Southeast Regional Carbon Sequestration Partnership, one of seven regional initiatives funded by the U.S. Department of Energy with more than 100 members.

During Mr. Nemeth’s tenure, the Board has undertaken projects in a wide range of energy and environmental policy and technology areas.  These include the creation of international partnerships and coalitions for clean energy, environmental protection, and economic development.  His diplomatic and political skills have facilitated government/industry partnerships throughout the world.  In the 1970s, he was responsible for developing a joint venture with the state of Nuevo Leon, Mexico, to examine the potential for importing natural gas.  During the 90s his leadership enabled the southern region to develop successful collaborative initiatives with the Republic of Uzbekistan, the Federative Republic of Brazil, the Industrial Estates Authority of Thailand, and the Republic of Viet Nam.  Ken has been a U.S. stakeholder member of the Carbon Sequestration Leadership Forum since its inception in 2003.

Mr. Nemeth currently serves as a member of the National Coal Council and numerous boards, organizations, task forces, and partnerships representing energy and environmental strategies and technologies. His service to the region is acclaimed with honors and awards throughout the country.  Mr. Nemeth is a graduate of the Florida State University in Tallahassee, Florida, and was awarded a Doctor of Science degree honoris causa from the University of the Cumberlands.